Phillips signed a two-year deal with Bayonne on Monday, becoming the third Ospreys player to join a French club.

The 28-year-old scrum-half follows British and Irish Lions team-mates Lee Byrne and James Hook in leaving Wales for France in the autumn.

"France seems to be the place of the moment," said Edwards.

"There's a very successful structure in their rugby, a very prominent and very wealthy position that they're enjoying at the moment thanks to television.

"Nobody can blame any of these professional players for moving to whichever part of the world it is."

The Ospreys told Phillips he could leave the Welsh region after four years at the Liberty Stadium in April despite having one year left on his contract.

Centre Hook will join Perpignan after the 2011 Rugby World Cup while full-back Byrne is to move to Clermont Auvergne. 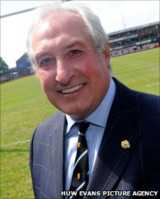 In an ideal world, we'd all have our best players playing in our own league

But Edwards, the Wales scrum-half icon often hailed as the sport's greatest player, is concerned at the numbers of Welsh internationals playing outside of the country.

"They've got very short careers and they've got to make the best decision at the time when obviously France in particular has got the attraction financially," he said.

"Of course, in an ideal world, we'd all have our best players playing in our own league, wouldn't we?

"I'm concerned about that because I think young people need heroes and they need to try to emulate their heroes and to see these guys playing regularly on your doorstep is one way to... attract young members to the game.

"So I don't think it does anything for Welsh rugby in the long term to see them going to another country to play."

Edwards won seven Five Nations Championships, including three Grand Slams, during an illustrious Wales career that spanned 11 years between 1967 and 1978.

The scrum-half was also part of two victorious Lions tours in New Zealand in 1971 and South Africa in 1974.

Edwards, now a director of Phillips' former club Cardiff Blues, believes the Ospreys' decision to relegate Wales' 2008 Grand Slam winner to a back-up behind uncapped Rhys Webb after the Six Nations was "odd."

He said: "It's odd to think that your national or international player is down the pecking order.

"I think that's for the Ospreys to decide whether or not he's still the best in the region.

"But, of course, anybody who has any aspirations of playing for their country needs first-team rugby and he needs to be playing.

"I'm sure, although he's a very confident player, it's done nothing for his confidence not to be picked for the region and yet still be expected to play international rugby."

Phillips is one of seven players in coach Warren Gatland's 45-man preliminary World Cup squad that will be on the move over the summer.