Wales will go to the World Cup with deserved confidence after finishing their warm-up campaign with victory over Argentina in Cardiff.

A loss at Twickenham two weeks ago was hardly disastrous and Warren Gatland's side took their revenge against England with a 19-9 win on home turf the following Saturday.

But now the players who sweated in training camps in Poland and put their bodies on the line over three tough Tests face a nervous wait to see if they have made the grade.

"Someone said to me it's the best start Wales have had going into a World Cup in terms of momentum and confidence," Gatland said.

"We've got to believe we're in good shape physically, we've won five of our last seven games so we've got to have that confidence when we get on the plane."

Gatland will cut his squad down to a final 30 on Monday before they leave for New Zealand on 30 August.

Wales have not beaten the Boks since 1999, just before that year's World Cup, but have lost by less than a score on four of the 12 occasions since then.

There then follows games against World Cup bogey teams Samoa and Fiji, which promise to be equally bruising encounters, while group minnows Namibia will at least provide a physical test.

Wales will go to New Zealand without captain Matthew Rees and the absence of the British and Irish Lions hooker because of impending neck surgery leaves large boots to fill.

But open-side flanker Sam Warburton has blossomed in the captain's role, leading from the front with performances that have had coaches and critics alike purring with delight.

Warburton was rested against the Pumas, no doubt packed up in cotton wool by the Wales management having done his bit against England.

It was the Pontypridd product's last Test at the Millennium Stadium and his 99th Wales cap, and if he is not selected for the World Cup squad it will have been his last.

The 35-year-old did not start that well against Argentina, giving away the first penalty which Felipe Contepomi kicked wide, but went effectively about his business after that.

"It was just a privilege to be part of this side for so long, playing with some great players and under great coaches," Williams said.

"You've kind of lived the dream so, yeah, it was a nice way to bow out with a win and to be part of a successful side to finish off the warm-up games.

"We spoke all week as a group that for us it wasn't about individuals, it was about keeping momentum going from last week.

"There was a lot of pressure on us I felt, particularly on the boys who hadn't played in those first two games."

Williams may be at the end of his international career but the man they call 'Nugget' is a golden oldie, with a wealth of experience that would serve Wales well in New Zealand. 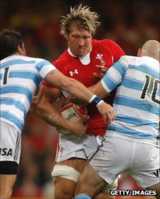 We know he's big, physical, he's able to carry, gets some off-loads

Added to that is the fact that Williams and Warburton are the only specialist sevens in the squad. Dan Lydiate can play there but the Dragons youngster is better used in his natural blind-side role.

What has become clear from the two Wales-England games is that Gatland now sees Lydiate, Warburton and Toby Faletau as his preferred back-row.

It is an area of the squad in which Wales have considerable strength in depth; Ryan Jones is almost certain to make the squad, especially with his ability to fill in at lock.

The inexperience of Justin Tipuric and Josh Turnbull is likely to count against them, while Jonathan Thomas and Andy Powell will have their fingers crossed - Powell's case helped by the Sale number eight's try against Argentina.

"Yeah, he did all right," said Gatland of Powell after the game. "One of the things we said about Andy was we know he's big, physical, he's able to carry, gets some off-loads.

"He did that and the big challenge for him was to be error-free and limit the number of turnovers that he sometimes does have in games, and I thought he did that pretty well."

The situation with Gareth Delve is more puzzling. The 28-year-old has impressed playing for Melbourne Rebels in the Super 15 this season - against many of the opponents and on some of the same grounds Wales will encounter in the World Cup.

But the former Bath and Gloucester player has not even made the bench for Wales this August, instead being allowed to turn out for the Rebels in their mini-tour of Britain.

Injuries to Rees and loose-head prop Gethin Jenkins, who will miss the opener with the Springboks, have left Wales under-strength in the front row, although the return of Adam Jones against Argentina was a big plus.

The form of wing George North, who against the Pumas scored his sixth try in eight Tests, adds another dimension to an already potent Wales back-line.

Gavin Henson's wrist injury seems likely to rule him out of the 30-man squad, but the centre could yet feature in New Zealand if he heals quickly and others fall by the wayside.

Lee Byrne looked rusty on his return to full-back after a long-term injury, but the Lion's form should return and it would be a major surprise if he was not selected as the only specialist 15 in the preliminary squad.

Wing Leigh Halfpenny, who made a more impressive injury return, can play full-back, as can James Hook, although he remains ahead of Stephen Jones in the fly-half pecking order - especially with Jones's continuing calf problems.