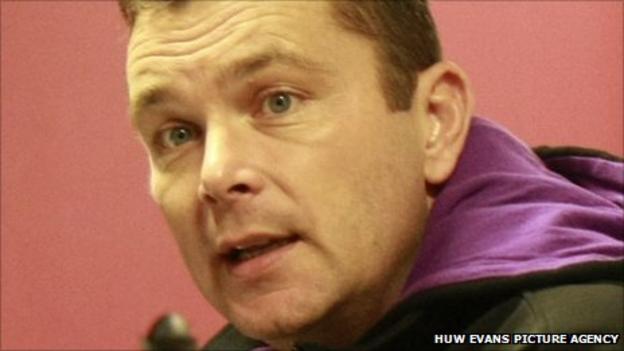 Head coach Sean Holley has said the absence of eight Ospreys players who will be playing at the World Cup presents an opportunity for the region's youngsters.

Seven Ospreys players have been included in Wales' squad with Tommy Bowe in Ireland's travelling party.

"There's obviously guys who recognise that they have a chance in the jersey this year, which is great," he said.

Ospreys begin the RaboDirect Pro12 season against Leinster on 2 September.

Their absence will give an opportunity to Ospreys' younger players, who have featured in the region's pre-season matches against Lyon and Russia, to stake a claim.

Wales internationals Jonathan Thomas, Ian Gough, Duncan Jones and Andrew Bishop have been overlooked by Warren Gatland and will start the season with the Ospreys.

Flanker Justin Tupric also missed out on Wales selection while hooker Richard Hibbard and Scotland's Nikki Walker are out injured.

And Holley believes the younger players will benefit from playing alongside experienced internationals.

We haven't picked up too many major injuries, which is a big concern because our squad's a little bit depleted

"We challenge these youngsters to step up and be the next ones to produce the goods in the shirt and hopefully go on to play for the national team as well," he said.

"That's what we've been about the last five, six years and we want to continue that but at the same time compete domestically.

"They're carried on by people like Ian Gough, Duncan Jones, Mefin [Davies], Sonny Parker and Andrew Bishop, who have been exemplary as well.

"We're under no illusions to the challenge because we'll miss so many. But it does bring a real freshness to us and [we're] looking forward to it."

The Ospreys completed their preparations for the new season with a 46-19 victory over World Cup-bound Russia at the Liberty Stadium.

And Holley said he was pleased following a performance which saw the Ospreys run in seven tries against Kingsley Jones' side.

"We haven't picked up too many major injuries, which is a big concern because our squad's a little bit depleted," added Holley.

"We haven't booked too many friendly matches in to be honest.

"It was our final run out game wise and [I'm] pretty pleased with the way the boys stood up."