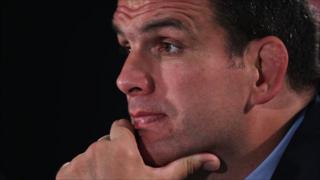 England manager Martin Johnson says his side's 13-9 win in their opening World Cup match was "fantastic" as they could easily have lost to Argentina.

Johnson also defends Jonny Wilkinson for missing five kicks - including four in a row - saying wind may have been an issue.

Wilkinson went on to convert Ben Youngs' try and added a penalty six minutes from time to help his side to a narrow victory.