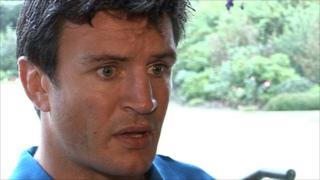 Martin Corry says England manager Martin Johnson must trust his players to make the right choices following during a rest day at the Rugby World Cup in New Zealand.

The former England captain and back-rower, who won the World Cup in 2003, also believes Johnson's side can still triumph in the tournament despite admitting they are "winning ugly" after stuttering victories over Argentina and Georgia.

Speaking at golf event organised by the Rugby Players' Association, Corry told BBC Sport's Matt Slater that the England players are "trying to put things right" and reckoned Mike Tindall and Manu Tuilagi should form the centre pairing from now on.