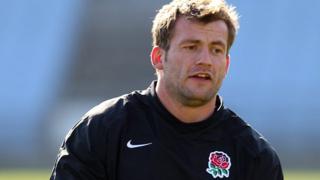 Winger Mark Cueto tells BBC Sport's Ian Robertson of his delight at being named in the England side to face Romania on Saturday following injury, and says the drinking row has been "blown out of proportion" by the media.

The 31-year-old Sale Sharks player will be making his first appearance of the tournament in place of Delon Armitage having missed England's opening fixtures with a back injury.