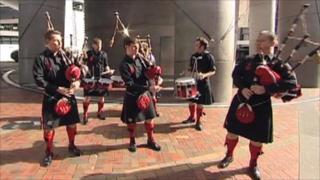 BBC Sport's Dan Roan previews Saturday's Pool B World Cup match between England and Scotland, in which the Scots must beat their rivals by a minimum of eight points to stand any chance of progression.

Roan looks back at the last time Scotland beat England by more than eight points, in 1986, speaks to some passionate Scots playing their bagpipes and some confident Englishmen who believe their side will come out victorious.