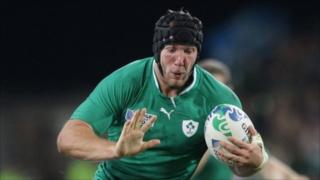 Ireland flanker Stephen Ferris hails his team's belief as they "rack up a good few points" in their 36-6 win over Italy.

The win means Ireland go through as winners of C - the first time an Irish team have topped their pool in a World Cup - and they will now take on Wales in the quarter-finals on Saturday.

Ferris says Ireland's performances in the group stages, including the win over Australia, show were they are on the world stage.

The Ulsterman says Ireland's players now want to usher in a "golden era of Irish rugby and push on from winning the 2009 Six Nations Grand Slam."