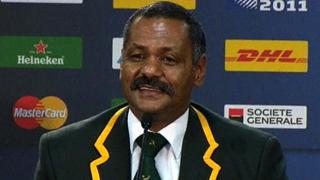 'Incredible journey' over for De Villiers after quarter-final defeat

South Africa coach Peter De Villiers hints that he is ready to step down following his side's 11-9 defeat to Australia in the World Cup quarter final.

The 54-year-old guided the Boks to a 2-1 series victory over the British and Irish Lions in 2009 and the Tri-Nations title later the same year.