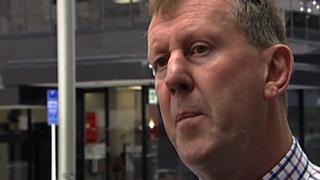 In an interview with BBC sports news correspondent Dan Roan, RFU chairman Paul Murphy reveals details of the reviews his organisation are conducting into England's performance at the World Cup in New Zealand.

England were knocked out of the tournament in the quarter-finals following a 12-19 defeat by France and also suffered a series of disciplinary incidents away from the pitch.

Former England international Fran Cotton is part of an independent panel that will make recommendations to the RFU, while a separate review is also being carried out by the RFU's elite rugby department.