Australia strolled to an easy victory over the star-studded Barbarians side in a one-off match at Twickenham.

Tries from Digby Ioane (2), Lachie Turner (2), James Horwill (2), Rob Horne and Radike Samo put the makeshift side to the sword.

Australia, who lost to Henry's side in the semi-finals of the World Cup, fielded their strongest available line-up, while the Barbarians included England reject Danny Cipriani at fly-half, Wigan and England rugby league full-back Tomkins on the right wing and South African lock Victor Matfield in his last game after a career of 110 caps. 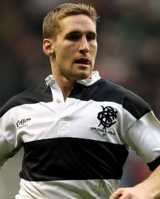 The Tri-Nations champions, though, were a class apart and cruelly exploited the lack of cohesion in the Baa-Baas ranks, with the impressive James O'Connor adding 20 points from the boot in his first game at fly-half.

Australia go on to play Wales, the side they defeated in the World Cup third place play-off last month, in Cardiff next Saturday.

"It's ideal for us, the right order to have the games. That (Wales) is going to be a tough assignment so it was good to have a hit-out before we get to the Millennium Stadium," said Australia coach Robbie Deans.

With Twickenham, the headquarters of English rugby, still reeling with the fallout from the World Cup, the 51,212 crowd were hoping for a feast of running rugby to lighten the gloom.

But Australia quickly showed their intent to take the fixture seriously and O'Connor was asked to kick for goal after only two minutes, to a backdrop of boos.

The first try almost came soon after, only for Turner to make a mess of his final scoring pass, and the Barbarians levelled the score from the boot of Cipriani following a scintillating break from Robbie Fruean.

The uncapped Kiwi centre intercepted a sloppy Australian pass deep in his own half and raced 60m upfield.

The Australians, when they play like that, are an outstanding rugby side

But his pass to the supporting Tomkins, who acquitted himself well in his first game of union, was ruled to have been deliberately knocked on by Adam Ashley-Cooper and the Australia full-back received 10 minutes in the sin-bin as Cipriani stepped up.

The Wallabies, growing in confidence, edged in front when O'Connor scuffed an ugly drop-goal over the posts. And despite a promising break and chip-ahead from the Barbarians' South African winger Bryan Habana, Australia went over for their first try when Ioane sliced through in midfield in a well-worked move off a line-out on the left.

The increasingly pivotal O'Connor added the conversion but the Barbarians squandered their own scoring chance soon after, when a beautiful dummy from Habana sent him free down the right, only for the final pass to Tomkins to be judged forward.

In a fractious game, Australia had another man sent to the sin bin when James Slipper hit Cipriani late, but the Wallabies should have scored despite their lack of numbers when O'Connor flung a bad pass to replacement prop Ben Alexander after a flowing attack.

On the stroke of half-time Australia did take advantage of their growing pressure when they put Turner over on the right corner. The gap remained at 15 points, though, as Baa-Baas scrum-half Peter Stringer snaffled the ball off its tee as O'Connor took his time over his conversion, the referee ruling he had begun his run-up.

Cipriani gave the Baa-baas a much-needed fillip with a penalty shortly after the interval but Australia remained at arms' length when replacement Horwill crashed over with his first touch from a line-out on the left.

The invitational side were dealt a further blow when they lost Italian Salvatore Perugini to the sin-bin on 52 minutes.

And immediately, off a line-out on their own line, Cipriani threw a speculative offload straight into the arms of Australia centre Horne to dive over.

The Barbarians' spirit seemed crushed and Horwill, Turner and Ioane all went over again before Samo coasted through late on.

The Barbarians gave the crowd one last cheer, though, as they worked Tomkins over in the right corner. And in a final bow, Springbok great Matfield, who retired after the World Cup, stepped up for the conversion, only to miss-kick badly.

"The Australians, when they play like that, are an outstanding rugby side. They played some real quality football. We just couldn't hang on to them," said Henry.

Tomkins, whose brother Joel has switched codes to sign for Saracens, said: "When I came in on Tuesday I was so raw I didn't even know what the numbers for each position were.

"The boys were saying 'we'll play this off the 12 or the 10' and I didn't even know where those blokes were so that was a bit of a challenge.

"Where I am from people don't know what rugby union is and I am glad I have had the chance to play but I am still a rugby league player."