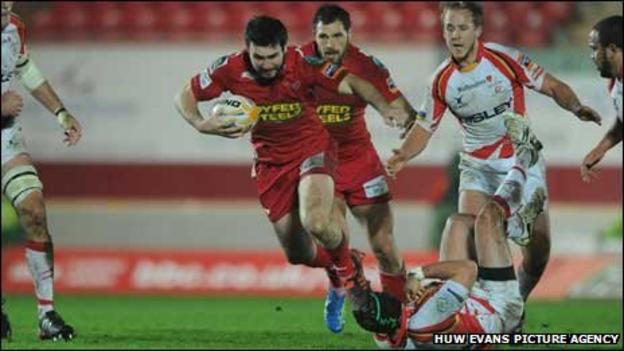 Captain Stephen Jones led by example as he inspired the Scarlets to a hard-fought Welsh derby victory over the Dragons in his 300th appearance.

A flawless kicking display by the fly-half, overlooked by Warren Gatland for Wales' Australia Test next month, extended their unbeaten run to seven.

But Jones and Adam Hughes missed kicks to deny the struggling Dragons a much-needed losing bonus-point.

Jones, however, once again emphasised his quality to Wales coach Gatland as the Llanelli region's top points scorer showed why he is so crucial to the Scarlets with 17 points.

Jones and Tovey swapped penalties in the opening five minutes as both openside flankers Gavin Thomas and Johnathan Edwards committed offences at rucks.

The Dragons, helped that the Scarlets were struggling at the line-out, made the better early chances and it took a good tackle by Gareth Maule to stop wing Aled Brew scoring at the left corner.

Jones put the Scarlets six points into the lead with two penalties despite the Dragons often looking the more dangerous.

Tovey did get a penalty back and should have had a chance to draw the scores level but the Dragons kicked for the corner only to see the Scarlets go up the other end to score the only try of the half.

Tovey misjudged a Jones kick and the loose ball broke replacement centre Viliame Iongi and the debutant Samoan set up former Dragons prop Thomas who crashed over just before the restart.

A scrappy second half began with Tovey kicking his third penalty to reduce the deficit to seven points.

But Jones cancelled that out 12 minutes from time after Dragons back-rower Tom Brown was sin-binned for slowing up ball at a ruck in front of his own posts.

Dragons replacement fly-half Jones and Llanelli's namesake Stephen swapped penalties in the space of three minutes as neither side looked like scoring a try in the second half.

Jones missed a last minute long-range penalty for the Dragons who were left to rue missed opportunities as Darren Edwards' men slipped to their third successive league defeat.