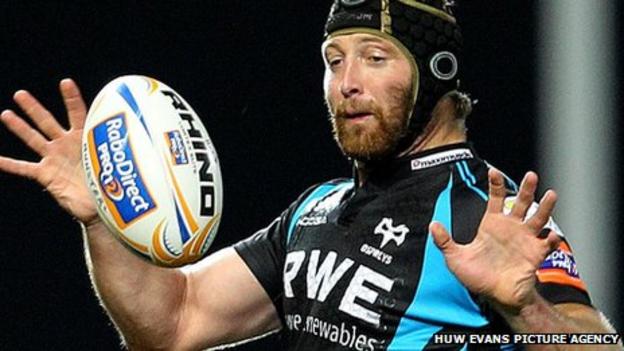 Wales lock Ian Gough has signed a new two-year contract with the Ospreys.

The 35-year-old joined the Ospreys from the Dragons in 2007 and has won 64 caps for his country since making his debut in 1998.

Gough is set to make his 100th appearance for the Ospreys against Connacht in the Pro12 on Saturday.

"I'm really pleased to get there. It was only a month or so ago that I was looking at my appearances and realised I was getting pretty close so it's nice to get there.

I'm delighted for Goughie, on both reaching his 100th cap and his new contract

"I got to 92 at the Dragons so I fell just short there, which makes it even nicer to complete the century at the Ospreys.

"The next target for me now is to maybe break through the 200 regional appearances barrier at some time this season, and having signed a new contract I want to take it on some way beyond that number.

The second row made his Wales debut against South Africa in 1998 and was a member of the Welsh squad which won Grand Slams in 2005 and 2008.

His most recent cap was against Fiji last November and he was overlooked by Wales for the World Cup in New Zealand.

"I'm delighted for Goughie, on both reaching his 100th cap and his new contract," said Humphreys.

"He was a player that I wanted in our squad for a considerable period of time before we finally got hold of him.

"He's been a fantastic servant to the region and a real asset to the team, a very durable character and one of the natural leaders in our environment."