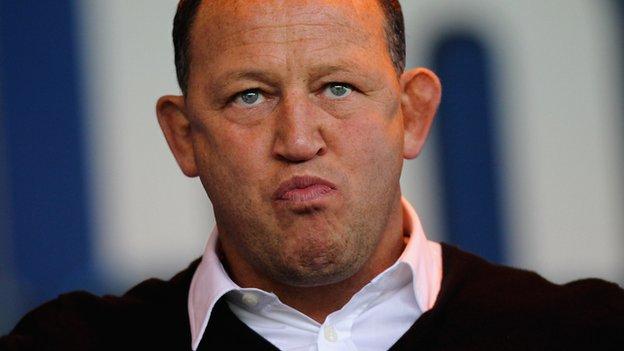 Sale boss Steve Diamond has been banned for 18 weeks by the Rugby Football Union for abusing match officials.

The charges relate to comments made to referee Wayne Barnes and his assistants after the 21-19 loss at London Irish.

Last October, Diamond received a £5,000 fine and a 12-week suspended ban after an incident against Northampton.

Referees are entitled to respect at all times, whether the final whistle has been blown or not

The Sharks' chief executive has been charged under Rule 5.12 which covers "conduct prejudicial to the interests of the union and/or the game".

Diamond - who has also been handed a £4,000 fine - will be unable to enter the playing enclosure, technical area, approach match officials and communicate or attempt to communicate directly with match officials before, during and after the game on the day of the match until the ban expires on 20 June.

In a statement, the RFU panel, which was chaired by Sean Enright, said: "Referees strive to do the best they can in a highly pressurised environment. Wayne Barnes is acknowledged as one of the best referees in the game. Referees are entitled to respect at all times, whether the final whistle has been blown or not."

Barnes was the focus of Diamond's post-match comments at the Madejski Stadium when he said: "I'm concerned about the referee being absolutely right about the penalty at the scrum.

"It is hard to take when such a crucial decision is made like that. He has to be 100% right that we wheeled the scrum.

"He ought to come to a coaching session and see that the wheel went out of the game 10 years ago."

The former hooker was handed a heavier sanction than the one he received following the match against Saints as his previous punishments were suspended until 31 May 2013, on the condition there were no repeat offences.

At his previous hearing, Diamond was also told he had to undergo a course of media training before the end of the season.