Wales international prop Rhys Thomas has undergone heart surgery after being taken ill during training with the Scarlets, the Welsh club has confirmed.

The 29-year-old was taken to Morriston Hospital in Swansea on Thursday morning and has "undergone successful surgery" and is in a "comfortable condition".

Thomas, the last of whose seven caps came in 2009, will recover in hospital.

"Our thoughts and best wishes are with Rhys, his wife Paula and their family," said Scarlets chief exec Mark Davies.

"The region will be keeping in close contact with medical teams at Morriston Hospital as to his progress but it is understood that he is comfortable and doing well.

"I am sure the whole rugby community in Wales would join with us in expressing to Rhys - all our very best wishes for a quick and comfortable recovery." 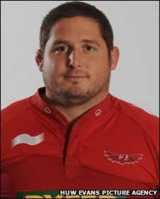 Thomas was taken ill during training at Parc y Scarlets on Thursday and was treated by Scarlets medical staff before being taken by ambulance to hospital.

"One ambulance was sent to the incident and the crew transported a male patient to Morriston for further treatment."

Wales team manager Alan Phillips said the news had come as a chock to members of the national squad who are currently preparing for the Six Nations in Poland.

"All the boys send their best wishes to Rhys for a speedy recovery, as do all the management and coaches as well," he said.

Hooker Huw Bennett said in a statement released by the Welsh Rugby Union: "Rhys is a former Wales colleague and we were all shocked when we heard the news that he had been taken ill.

"I know the whole squad are thinking of him and his family at the moment and we would like to wish him a speedy recovery."

Thomas was born in South Africa but began his professional career in Wales, making his debut for Newport, the town of his father's birth, in 2003.

He came through the youth ranks at Rodney Parade and made a try-scoring debut for the Dragons following the advent of regional rugby in a 27-5 win over Glasgow in October 2003, before establishing himself as a Dragons regular in the 2004-05 season as the team finished fourth in the Celtic League.

The tight-head made his international debut in Wales' 45-27 defeat by Argentina in Buenos Aires in June 2006, replacing Adam Jones in the second half.

But he was unable to play for seven months between October 2007 and May 2008 because of a mystery chest problem.

Thomas's next Test cap was in August 2007 when Wales were defeated 62-5 by England in a World Cup warm-up.

The 18st 12lb powerhouse joined Scarlets from the Dragons in 2009 after making 119 appearances for the Newport-based region.

Thomas has scored nine tries in 52 Scarlets appearances and has scored four times in 17 games this season - and his last outing was in their 16-14 win over Glasgow on 7 January.