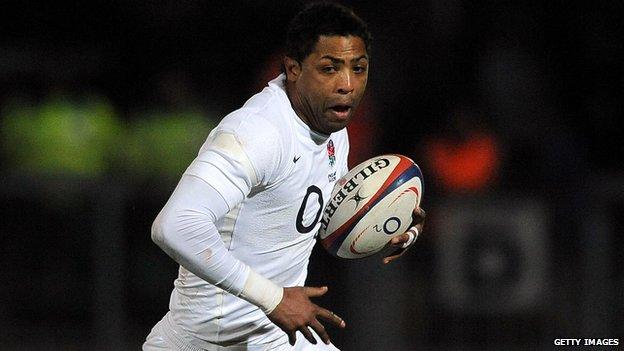 Delon Armitage has been dropped from the England Saxons squad after being arrested over an assault allegation.

London Irish back Armitage was detained in Torquay following an incident in a nightclub early on Sunday. He was released on police bail until 21 March.

Worcester wing Miles Benjamin will take his place against Scotland A on Friday.

A Devon and Cornwall Police spokeswoman said: "In the early hours of Sunday, January 29, 2012, a 28-year-old man from the Middlesex area was arrested in Torquay on suspicion of assault following an altercation in a local nightclub.

"The man was taken to Torquay police station and interviewed regarding the incident. He was later released on police bail until March 21, 2012 while investigations continue.

"A local man received a split lip during the incident but did not require medical treatment."

Two other players have also received Saxons call-ups after Bath back Matt Banahan and Leicester number eight Thomas Waldrom were added to the senior England squad preparing to face Scotland next Sunday.

Earlier this month, Harlequins scrum-half and Armitage's former England colleague Danny Care was told he would not be considered for Six Nations selection this season following his arrest on New Year's Day.

Care subsequently appeared before Southampton magistrates, where he admitted a drink-driving charge. He was fined £3,000 and banned from driving for 16 months.

And he insists his message about exemplary behaviour will get through to the players, despite the recent arrests of Care and Armitage.

He said: "We take issues surrounding the behaviour of England players very seriously and as such have decided to suspend Delon from the Saxons EPS [Elite Player Squad] pending the result of the police inquiry.

"We will then consider if further action is appropriate under the EPS code of conduct.

"High standards of behaviour are required from England players on and off the field, and they also need to understand that they should not put themselves in a potentially vulnerable position or environment."

Lancaster said he had spoken to Armitage, who has won 26 England caps, and added the player was "disappointed to get himself into this position".

"London Irish is extremely disappointed to hear about the incident involving Delon while on an England Saxons release period, and takes these matters extremely seriously," the Aviva Premiership club said.

"We fully understand the RFU stance on this matter, and will convene our own internal investigation to procure a full understanding of the matter in question, the outcome of which will determine any further action.

"Player conduct is a direct representation of the club and, therefore, inappropriate conduct will be strongly acted upon."

Lancaster had left Armitage out of his elite squad for the Six Nations tournament, which starts next weekend, and demoted him to the second-string Saxons team.