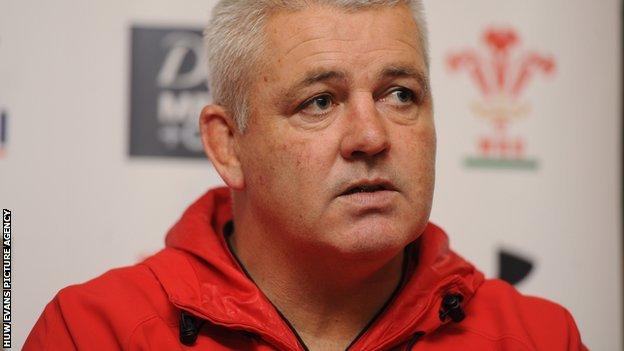 Coach Warren Gatland has warned Wales to expect an Irish backlash in the RBS Six Nations opener in Dublin on Sunday.

Ireland are still smarting from their 2011 Rugby World Cup quarter-final exit at the hands of Wales.

The Irish will be looking to put the record straight after Wales won last season's Six Nations clash in Cardiff with a controversial Mike Phillips try.

"That's when they [Ireland] are incredibly dangerous when they talk about payback," said Gatland.

"They will be disappointed with the way they played in the quarter-final.

"I think tactically we got a lot of things right that day and I thought our loose forwards were outstanding. Rhys Priestland was very good on the day.

"I thought it was an excellent Welsh performance, so that means that they talk about revenge."

Wales knocked Ireland out of the World Cup with a 22-10 victory in Wellington in October.

The victory came after Ireland had gone down 19-13 in Cardiff seven months earlier, with scrum-half Phillips scoring a decisive try following a quickly taken line-out.

Ireland complained bitterly after the match that the try was "illegitimate", claiming Wales had used the "wrong ball" at the line-out.

Gatland believes there is enough incentive for Declan Kidney's side to kick-off the Six Nations with a dose of revenge.

"We saw that last year when England turned up to win the Grand Slam [in Dublin] and they [were] well and truly beaten by a very motivated Irish team on the day," he said.

"You have got to look to their provinces. They are doing extremely well - three teams in the quarter-finals of the European Cup. So it's going to be a tough ask for us."

A Wales victory in Ireland would set up for an encouraging campaign, which includes three home games against Scotland, Italy and France.

That was a similar scenario to when Gatland guided Wales to their second Grand Slam in three years in his first season in charge in 2008. That season Wales started with a win on the road at Twickenham.

"We are very well aware that if we can win this first game and get some confidence and get some momentum we have got three homes games out of four after that," added the New Zealander.

"It sets us up to for what is potentially a very successful championship.

Wales have lost their last three matches - France and Australia (twice) - and they go into the Six Nations with injuries to key players in prop Gethin Jenkins, and locks Alun Wyn Jones and Luke Charteris.

There are also doubts over Priestland, flanker Dan Lydiate and centre Jamie Roberts.

But Gatland, who took his training squad to Poland last week, says he is trying to instil some confidence in the Wales team just as they had in the World Cup.

"I think we tried to creep under the radar for the World Cup. We knew we were in great shape physically," said Gatland, who will name his team on Friday for the opening game.

"We were quietly confident and no one was talking about us. But there was a huge amount of expectation on us post World Cup to do well.

"People are talking us up a bit. We have got to have that confidence and belief we can have a good tournament and that's a challenge for us to accept that as a team.

"It hasn't always sat well with us. I think my experience with Welsh teams is that there are two times when we are at out most dangerous - when we have our backs are to the wall and when we are playing with confidence.

"I thought the World Cup was the latter when we were self belief and confidence and that's why we had such a good World Cup, and it's important we get off to a good start."