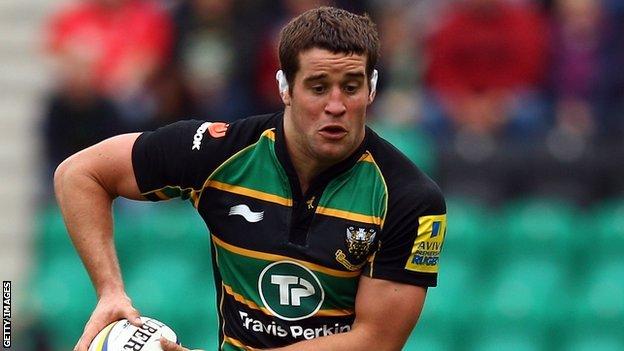 Northampton director of rugby Jim Mallinder says Calum Clark will captain the team to face Wasps in the LV= Cup.

On Tuesday, the 22-year-old flanker was released back to Saints from Stuart Lancaster's England squad for the Six Nations match against Scotland.

Mallinder told BBC Look East: "I'm sure that sometime during the Six Nations, he'll get that call, because he certainly deserves it.

"But it's fantastic to have him back. He'll be captain on Saturday."

He added: "I'm sure he'll want to show what he can do, perform as he does every single week for the club and by doing that, England will come."

Clark said on Twitter he was "angry" at not being involved with England, but vowed he would be "leaving all I have on Franklin's Gardens, Saturday afternoon instead."

Having joined the Saints from Leeds Carnegie in 2010, Clark has made 48 appearances in the green, black and gold and was called up to Lancaster's first elite player squad in January.

"It's quite hard to get extra motivation from Calum," added Mallinder. "Every single time he trains or goes out playing, he's fully motivated, and that's why we love him so much."