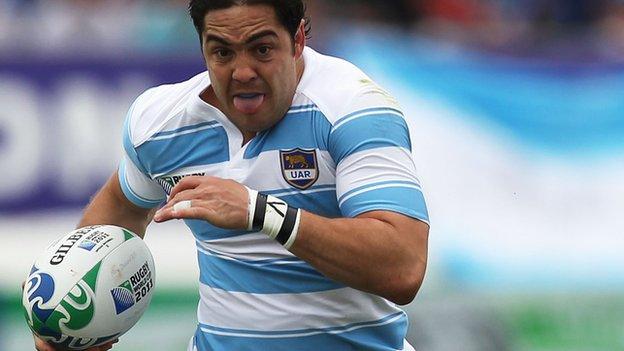 Argentine wing Horacio Agulla has not given up hope of being offered a new contract by Leicester Tigers.

Director of rugby Richard Cockerill has said Agulla's international commitments meant Tigers would not extend his stay when his deal expires this summer.

But the 27-year-old said talks between the Argentine Union and the RFU could yet see him stay at Welford Road.

"He [Cockerill] said if something changed we can talk again," Agulla told BBC Radio Leicester.

"He told me that they really want me here but it is hard for them and I understand that."

Agulla, who joined Tigers from Brive in 2010, has also had offers from Premiership clubs as well as offers to play in France.

But he is almost certain to be in his national side's Four Nations squad.

The players, the coaches, the crowd and the atmosphere in Leicester is unique. If I had to choose, I would never leave - I love it

And that means, although he is reluctant to leave Leicester, he is pinning his hopes on an agreement being reached so he can return to club rugby before the current scheduled date in early October.

Agulla added: "I am in a big transition with Argentina and that is my priority. I can't say no to my country so I need to make a choice but it is not over.

"Hopefully the Argentina union will have a few meeting with the RFU and French league as well so I hope they can find an agreement so it is easier for the players for the players.

"It is not just me there are a lot of players in the same situations. Maybe if they release us in November we can sit down and talk again.

"It is a shame, I would love to stay here. The door is not closed yet but we have to wait.

"I am enjoying it very much here and am learning a lot. I am at one of the best clubs in the world so I do not want to leave.

"I'm really happy here. The players, the coaches, the crowd and the atmosphere in Leicester is unique. if I had to choose now I would never leave this place - I love it."