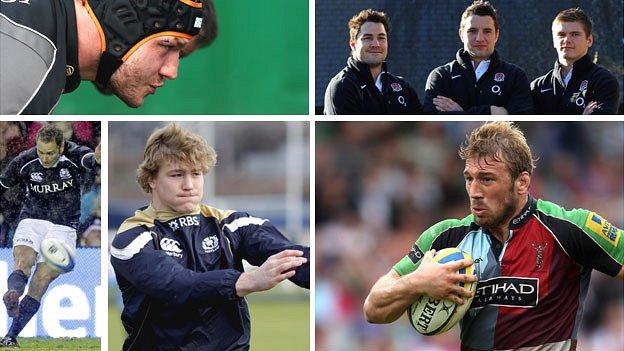 Former England centre Jeremy Guscott and ex-Scotland scrum-half Andy Nicol on what to expect when Scotland host England with the Calcutta Cup at stake on Saturday.

What do you make of new-look England?

AN: This is the least experienced England side I can remember and in many ways the least intimidating.

It's new boss Stuart Lancaster's first game in charge and there are lots of unknowns about England this year. I don't think anyone can predict with any authority how they are going to cope because many of their guys won't have played at Murrayfield and experience does count for an awful lot. They also haven't won at Murrayfield since 2004.

JG: It's very difficult to get a picture of how England are going to try to play, because we don't know about many of these players in the international arena.

There are a few fairly experienced players with 30-odd caps, but Scotland have more than twice as many caps, and England have three debutants, plus a new coach. For all their talk so far, it remains to be seen how they actually come out and perform.

The new boys on show in Edinburgh

JG: England have three debutants in the starting XV, while new captain Chris Robshaw has won only one cap. Phil Dowson, who will make his debut at number eight, is a good, consistent performer in the back row for Northampton and Robshaw is exactly the same for Quins.

They are also both leaders, but we don't yet know how they'll go at the very highest level as players.

In the centres Brad Barritt will carry the ball hard into the midfield and tackle like a demon, while Saracens team-mate Owen Farrell will pass and kick, but his breaks are very few and far between - he's not going to light things up with his running game.

Farrell, 20, is a very good kicker and has proven his temperament in that arena before by kicking crucial penalties, notably in the Premiership final last season, but we still don't know if he can deliver at international level.

AN: There's just the one debutant for Scotland in Lee Jones, but number eight David Denton will be making his first start.

Denton, 21, is a very physical, fast back rower who can play six or eight. It's his first real full season with Edinburgh and he's been a revelation.

Winger Jones's selection is a direct result of how well Edinburgh have been playing. The 23-year-old former Sevens international has a lot of pace, his work rate is fantastic and he is playing with a lot of confidence.

Who are the key men?

AN: It's very clear that Dan Parks has been brought in to get Scotland playing in the right areas of the pitch. It is something the fly-half does very well - his tactical kicking game is probably one of the best in the tournament and he understands the angles. He's got a unique, low kicking style but it is very accurate.

His main role will be to make sure Scotland play exactly where they want to play, and they'll start their attacks from those areas.

Denton works very well in tandem with Edinburgh open-side Ross Rennie, who is quick about the park and an out-and-out seven. He's very good at getting his hands on the ball in the tackle and is a different sort of player to John Barclay, who has held that shirt for a number of years.

Tactically Rennie's got a very good brain and he'll be looking to inject a bit of pace into the attack. He's very good at the off-loading game, and very good at reading when to release the ball and when to hold onto it. Both back rowers have got a very important job to do in the way Scotland are going to play.

JG: A lot of the key men for England are also among the new faces - Robshaw, Dowson, Farrell and Barritt will all need big games. The battle of the breakdown is always a key area these days - can Robshaw impose himself physically on Rennie, or will the quicker Scot beat him to the punch?

Recalled fly-half Charlie Hodgson also has a big role to play, both as one of the older heads and as the playmaker. At Saracens he, with the help of Farrell, normally uses the boot to get them into the opposition's half - only then does he use his fine passing skills to move the ball wide. Will we see him use that sweet distribution to bring in England's lively back three of Chris Ashton, Ben Foden and the recalled David Strettle?

So who is going to win then?

JG: The over-riding factor is that Scotland have loads more experience than England but there's nothing that says they're guaranteed to win. England's record at Murrayfield is poor but most of the current team haven't been involved in those games so that shouldn't be relevant - they won't be carrying any baggage.

The wintry weather at England's training base appeared to be perfectly in sync with the ambitions of interim coach Stuart Lancaster - first a bright new sunny dawn, then a fierce wind to blow away the dead wood

I've gone to and fro, thinking first Scotland will win, then coming around to the idea that England will win, and then back again - I just can't make up my mind because there are too many variables we just can't know about yet.

AN: There are not so many big names in the England team but that probably makes them more dangerous - it's a young team that's been picked on form. They're doing well for their clubs, they're coming up with no baggage and it sounds like they've been given the licence to go out and operate.

The question is: how will they cope in the rarified atmosphere of a Six Nations game? That first 20 minutes on Saturday is absolutely key.

AN: These games are always tight, but I expect Scotland just to shade it with a score in the region of 18-14.

JG: My prediction will keep changing right up until the last moment - you'll have to tune in on Saturday to see what I settle on I'm afraid!