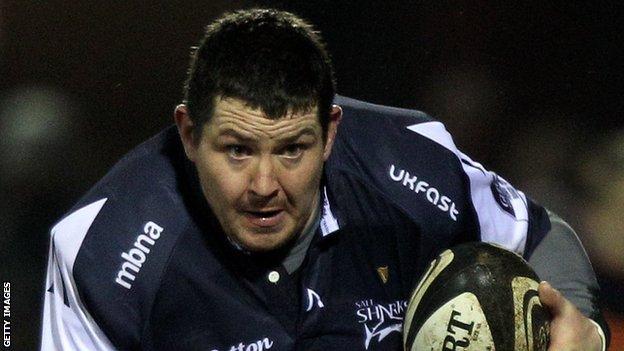 The 30-year-old will be a direct replacement for Andrew Sheridan, who has agreed a move to the French club.

Chief executive Steve Diamond said: "He's a very popular lad here, he knows the club well and I know that he will be a big crowd favourite once more.

"He's had a great experience out in France with Toulon and he'll come back all the better for playing over there."

They want to win things, and I'm massively keen to do everything I can to help the club.

After progressing through the Jets he made his debut in December of that year and established himself as a regular in the front-row.

The 6ft 1in prop, who weighs over 20 stone, was the heaviest player in the Premiership and earnt the nickname 'the Fridge' for his destructive carrying.

Diamond added: "Eifion can play both sides of the scrum and he's very durable and very hard working, which is what you need in those positions.

"He will give us that experience, which was what we need in the pack, and we just can't wait to have him back here again."

Lewis-Roberts, who won his solitary Wales cap as a replacement against Canada in 2008, said: "I'm grateful that Sale Sharks have given me the opportunity to return.

"There have been a lot of changes, all good, including the way the team's playing. They want to win things, and I'm massively keen to do everything I can to help the club.

"I've enjoyed my time in France. It's a tough league, with a different type of game, more focused on the set piece.

"This is a decision for my family. My wife Nia is expecting our second child in June and it's the right time to come back."