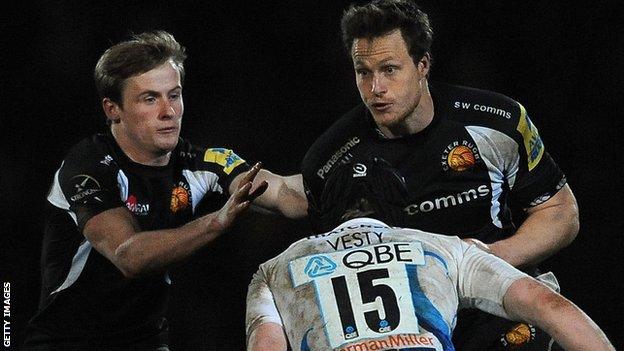 Exeter Chiefs boss Rob Baxter says his side did not play to their best as they were easily beaten 31-3 in the LV= Cup.

Exeter's only points came from a 24th minute Myles Dorrian penalty as an under-strength Chiefs side conceded a hat-trick of Tom Biggs tries before half time.

Olly Woodburn's try with 20 minutes to go then sealed the win for Bath.

"There were a lot of positives but I said to the guys that I don't think we played to our best," Baxter said.

"I'm disappointed that we didn't keep the ball, I think that we were a little bit edgy and I think we over-kicked, particularly in the first half.

"That didn't really allow ourselves to get in the game but I think we defended well for large periods, plus some of the young players stood up particularly well and come the end we had an academy front row on the pitch," he added.

Exeter already knew they could not make the last four of the competition after Northampton took an unassailable lead at the top of their pool with a 57-10 win over Wasps.