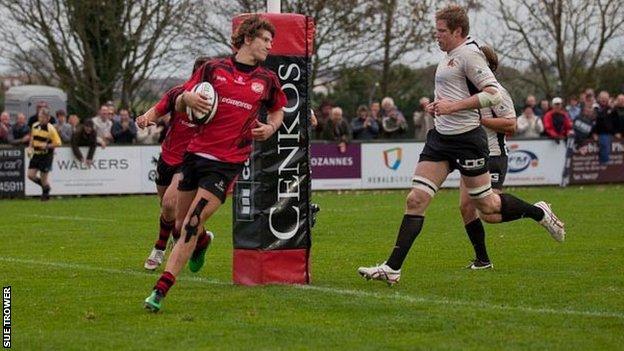 Jersey player-coach Ben Evans says Michael Le Bourgeois will not be rushed back from his hamstring injury.

Le Bourgeois, who is the top points scorer in National League One, has missed the last three games.

Jersey are five points clear at the top of the table and Evans told BBC Radio Jersey: "It's a hamstring injury and you can't rush it.

"Ben Harvey [director of rugby] is very aware that Mikey will only play once he's 100% and nothing else."

Because we're top of the league, teams will up their game to play against us

Jersey have won 15 games in a row and former Wales international Evans believes the islanders can secure a fourth promotion in the space of five years and go up to the Championship.

He said: "You've got to be confident but we have been hit by injuries.

"Nonetheless we keep plugging on and there are a number of tough games.

"Because we're top of the league, teams will up their game to play against us.

"Teams in the bottom half are going to be keen to try and spoil our party."

Jersey take on Stourbridge at St Peter in their next fixture on Saturday, 11 February.