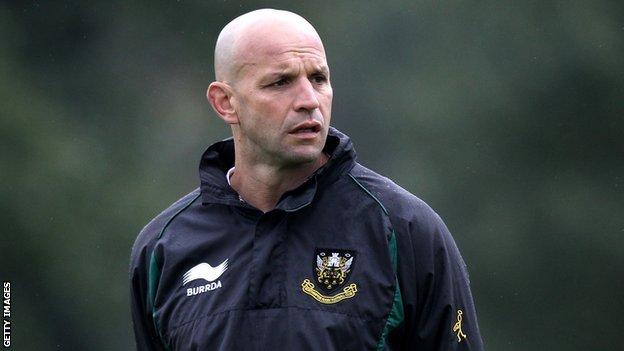 Northampton Saints director Jim Mallinder says his side are in a good position to re-create their LV= Cup success from 2010.

Saints, who triumphed over Gloucester two seasons ago, booked a home semi-final in this season's tournament with a 57-10 victory over Wasps.

Saints ran in eight tries in the win.

Mallinder told BBC Radio Northampton: "It's been a really good competition for us in the past. A home semi-final makes a big difference."

Noah Cato and Jamie Elliott scored two tries apiece against a depleted Wasps side, with Andy Long, James Craig and Alex Waller also crossing the line, plus a penalty try.

Mallinder's side will play Scarlets at Franklin's Gardens in March.

"The lads have come out determined and put in a good performance," said Mallinder.

"The defence was solid, we looked after the ball well and most aspects of our play went really well.

"A home semi-final is important to give us a chance of getting through to a final."

Calum Clark was released by England for the match but put in a strong performance as captain.

"He's not played many games this season through injury, but he played well today and led from the front in both attack and defence," Mallinder said.

"He's not a massive talker but he leads by example. His dedication to the cause is unbelievable. He never wants to lose, and he gets very upset when he does lose. I guess that's a sign of a true competitor."

Mallinder also praised the contribution of hooker Andy Long, who was making only his fourth appearance of the season.

"It was a good display from Andy. His set-piece was very strong and, round the field, he worked really hard. We're delighted with him. He's got an opportunity and I think he took it," he said.

"Mikey Haywood is just getting back [from a shoulder injury] but an extra week for him will do him a lot of good.

"We're pleased we've got some hookers who can do a good job when Dylan Hartley's away."