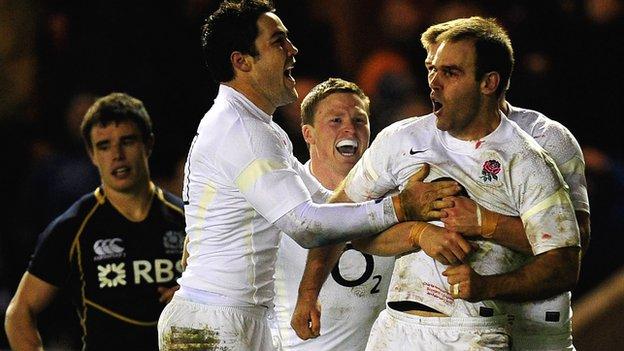 Interim England boss Stuart Lancaster praised the attitude of his side after they beat Scotland at Murrayfield for the first time since 2004.

Charlie Hodgson scored the only try of the game as England launched their Six Nations campaign with a 13-6 victory.

"It was a fantastic effort. I'm really chuffed for the boys," said Lancaster.

"It is what teams are built on, spirit, and they showed a tremendous amount of spirit and courage to play for each other and play for England."

A much-changed side, featuring seven debutants once the replacements had entered the fray, had to defend for long periods before seeing off a willing but limited Scotland side who continue to search for the elusive cutting edge needed to win at international level.

"There are lots of things we can improve on," said Lancaster. "But fundamentally it comes down to attitude and working hard for each other.

"It's all about getting the first win and we need to back it up now."

I thought we were outstanding in defence, especially in the first half when we were winning collision after collision

New captain Chris Robshaw, winning only his second cap, said he was "very honoured to go up there and lift that trophy on my debut as captain".

"We had a new group of players, a lot of new caps and they were all outstanding - Owen Farrell, Brad Barritt, all these kind of guys."

England were leading only 10-6 with seven minutes to play but 20-year-old debutant Farrell kicked a nerveless 40-metre penalty to leave Scotland needing a converted try, something they have not managed against England at Murrayfield since 2004, to draw.

"He's got a good temperament, hasn't he?" said Lancaster. "That ability to step up and perform on the big stage - he was nervous before the game and nerveless in it."

Saracens centre Farrell insisted: "That is just the start for us.

"We worked unbelievably hard for each other and the bonding as a team that we've worked on over the past couple of weeks really showed out there today - we can get better and better."

Farrell's father Andy, one of Lancaster's assistants, admitted that it was a "proud moment" seeing his son walk out in an England shirt for the first time.

"He took a few kicks that were a bit out of his range," said the former Great Britain rugby league star. "But he got the ball down in the right area of the field for us.

"I thought we were outstanding in defence, especially in the first half when we were winning collision after collision and being very physical. Everybody put in a mammoth effort for each other."

"To come up here and win with a very fresh squad is very pleasing. One of the things we work on at Saracens is putting pressure on kickers and I got lucky with the try," said the veteran number 10.

"The new guys have shown consistently, week in, week out, that they deserve to be here. Stuart Lancaster gave them their chance and they showed what they can do."