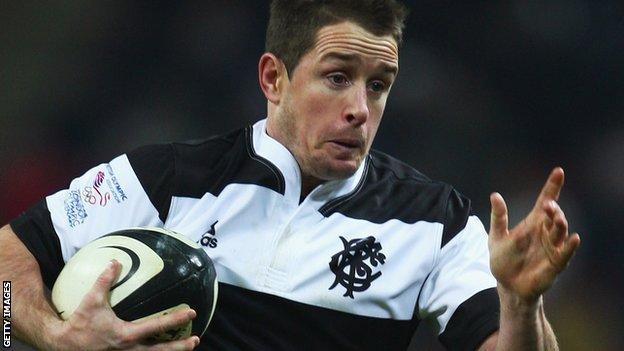 Shane Williams is set to end his career by playing for the Barbarians against Wales in Cardiff on 2 June.

Williams retired from Wales duty in December after scoring a last-minute try in the 24-18 loss to Australia.

The 34-year-old has brought forward his retirement from all rugby by 12 months to walk away at the end of this season.

"I've played for the Barbarians once before. When I was offered the chance to play this summer I had no hesitation in accepting the honour," he said.

"The Barbarians is a wonderful institution and sums up everything that is good about the game of rugby.

"To have a chance to finish by playing against Wales in Cardiff is an incredible opportunity and will bring my career full circle."

Williams made an emotional final appearance for Wales in December, capping off his illustrious career in style by scoring with the final move of the match against the Wallabies.

The wing, whose sole Baa-Baas appearance came against Australia in 2008, left the international stage as Wales' record try scorer, with 58 in 87 appearances.

His plans to play on for Ospreys until the end of the 2012-13 season changed last week when he announced his intention to retire in May.

An "ambassadorial" role awaits him with the region next season, and the two-time Grand Slam winner has already embarked on his career as a BBC rugby pundit.

"I've always said that I would never stay on too long and play rugby just for the sake of it," he said.

"Finishing playing for Wales after the World Cup felt like the right decision, and now I've had the chance to reflect on where I'm at, it feels right that this season will be my last."

Williams' planned appearance for the Barbarians against Wales will be in the final match of the invitational side's three-match series following games against England at Twickenham (27 May) and Ireland at Kingsholm (29 May).