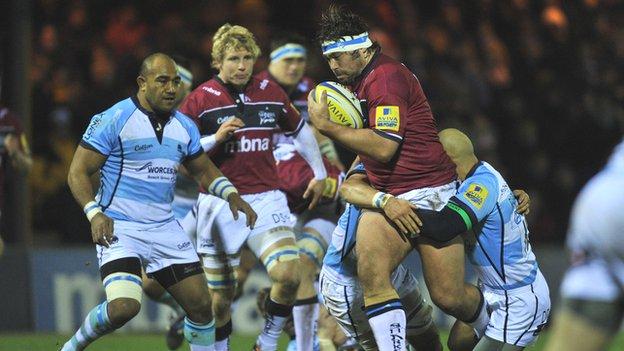 Fly-half Nick Macleod kicked five penalties to give Sale victory over Worcester which moved them to fifth in the Premiership.

The visitors ended the first half 9-6 ahead thanks to three penalties by Andy Goode, with Macleod firing over two.

Goode left the field at the break and Macleod booted the north west side level in the 50th minute.

Worcester missed out on a third successive Premiership win, although they do take a losing bonus point away from Edgeley Park.

But the hosts' victory was marred by the loss of England flanker Hendre Fourie to a fresh shoulder injury, after just 14 minutes, that saw him leave the field.

"I know he [Fourie] is a pretty angry man at the moment, he's very frustrated.

"Most of these things normally take a couple of days before they get scanned.

"It's a real shame because Hendre's worked so hard, he was outstanding for us last week.

"We couldn't pick between him and Dave Seymour so we decided to put both out there and we were really looking forward to them both having a crack. Hopefully, it's not too long so we can get him out there soon."

"Particularly early on, there were a couple of scrum decisions which I didn't personally agree with.

"The first two scrums were very disappointing, but after that it seemed to right itself and the referee seemed to realise that we were on top in the scrums and gave us the advantage.

"You see scrums refereed every week, it's a hard old job. We were five penalties against in the first 10 minutes and I thought, 'this is not going to go well at all', but it did even itself later on.

"I know referees are very reluctant, unless it's a stonewall penalty, they're reluctant to give a penalty in the last play of the game."