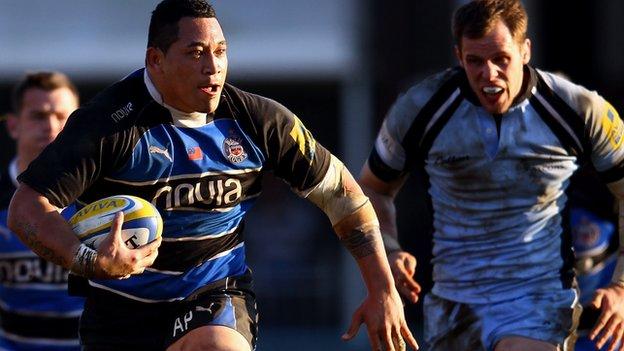 Bath battled back from a poor first-half display to beat bottom side Newcastle Falcons.

Bath turned it around after the break through Woodburn, a penalty try and Anthony Perenise before Will Chudley went over for the Falcons at the death.

They were much better than us in the second half, so credit to them

Bath went into the match off the back of three consecutive wins and were on the scoreboard in under two minutes thanks to Barkley's three-pointer from distance.

Woodburn went over in the corner after good work from Tom Heathcote.

The Falcons fought back almost immediately after sloppy defensive play left number eight Wilson to touch down and Vickers completed the turn around when he forced his way over from a scrum.

Perenise started Bath's revival with a clever kick through into the in-goal area that Woodburn won the race to touch down, before Gopperth conceded a penalty try for hauling down Tom Biggs off-the-ball as he looked certain to go over.

With Gopperth in the sin-bin the hosts turned the screw and the Samoan Perenise crossed to put Bath in complete control and give them a bonus point.

After Heathcote and Gopperth exchanged penalties, the Falcons claimed a bonus point of their own with the final action of the match.

Replacement scrum-half Chudley made the most of late pressure to scramble over and Gopperth added the extras.

"We started well and then got a bit careless. And we gave some silly points away.

"The second half was pretty important to the way we came out and came back at them.

"Apart from the try at the end, which was a bit annoying, it was 22 points in the second half. We stuck at it pretty well."

"We promised the guys would give their all for 80 minutes - and they did that. We showed a lot of courage and worked hard in defence. We scrambled well.

"But they were much better than us in the second half, so credit to them. Their 'chip through' try was a game changer. Next thing we knew, we were two scores behind.

"We had opportunities too in the second half but didn't take them."