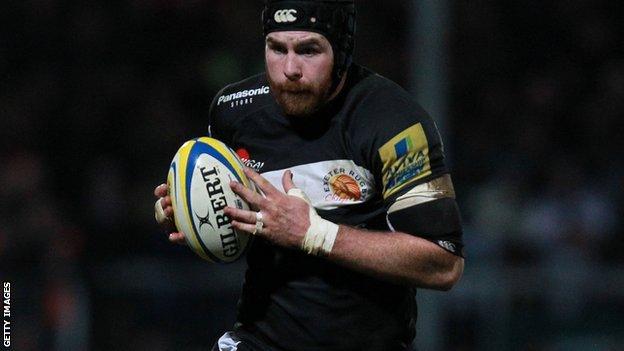 Exeter Chiefs moved up to fifth in the Premiership after completing a double over title chasers Leicester.

Richard Baxter's try put Chiefs in front for the first time and Mieres added the extras before kicking a further two penalties.

Leicester, who had won their last five Premiership matches, struck first when Tigers captain Geordan Murphy laid the ball off to Tuilagi, who broke through to cross the line after Phil Dollman failed to bring him down.

Fly-half Flood, who has recently returned from injury, then failed to add the extras but kicked over a simple penalty before the break.

Mieres closed the gap to two points at the break with a couple of penalties for Chiefs but Flood restored Leicester's five-point lead after the restart with his second three-pointer.

Exeter soon went ahead for the first time when Tom Johnson charged down Flood's kick and Baxter provided the vital touch for their opening try, which Mieres converted.

The Argentina international then curled over a penalty kick off the post before adding another to extend Chiefs' lead to eight points.

Flood missed a chance to close the gap to five points with another penalty attempt that hit the post and bounced back into play and the Chiefs held on despite prop Brett Sturgess being forced off with an arm injury.

"You have to get the record straight because we played them at Welford Road during the World Cup when they were severely depleted and we have been fortunate enough to play them during the Six Nations.

"So as great as it is to do the double over anybody, there are some factors that are involved and we have to be realistic about that.

"We were okay at half-time, then we kicked a penalty - but then there was the charged down try and the whole thing turned against us.

"We didn't control the ball, we forced the game, played into their hands and we should have been better than that. But we weren't and they worked hard, you make mistakes and they punish you.

"That is exactly what they did and in the end they deserved to win. For whatever reason we started to chase the game with 20 to go and made mistake after mistake and put ourselves under pressure.

"We have only ourselves to blame and we'll deal with it on Monday because I am not accepting that performance, it's not good enough."