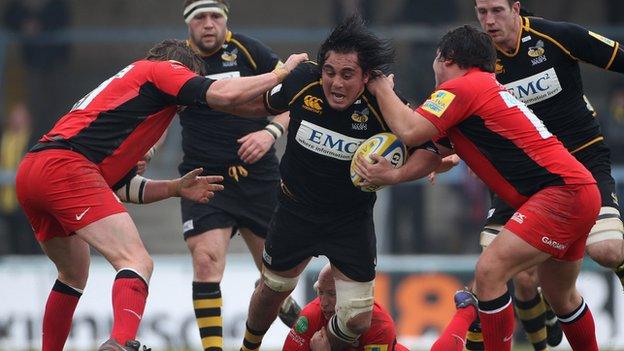 Alex Goode kicked 17 points as Saracens closed the gap on Harlequins at the top of the Premiership table with a hard-fought victory at Wasps.

Tom Lindsay's converted try edged Wasps back in front but another Goode penalty had Saracens 16-14 ahead at half time.

Two more Goode penalties in the second half were enough to win it.

When you come away from home to a club that are fighting for survival... to come and get the job done is a big achievement

It was Wasps' seventh successive Premiership defeat, but they made an encouraging start as Vunipola burst on to Riki Flutey's pass to touch down, Nicky Robinson adding the conversion.

Sarries responded immediately with two close-range penalties from Goode, who then added the conversion after Short snatched Vunipola's high pass to sprint in from halfway.

Wasps hit back when Lindsay ran on to a kick from Robinson, with the video official ruling that he had held on to the ball as he collided with the post when he went to ground.

Robinson's conversion edged Wasps back in front, but it was the visitors who were ahead at the break courtesy of Goode's third penalty.

Goode and Robinson exchanged penalties in the second half before the Saracens full-back made the result safe with his fifth three-pointer.

"It's not a healthy position to be in and it's not something we're proud of but that was a game we could easily have won.

"Of the games we have lost, in two or three we've been well beaten but in the others we could have won.

"Playing at home against a Saracens team missing a few players, these are ones you've got to nail. We created opportunities but we didn't have that clinical edge to turn pressure into points."

"We had to deal with a couple of tries which were scored out of nothing. We showed character, discipline, patience and resolve to get the job done.

"In the first half, aside from those two tries, we felt we were dominant. We had a lot of possession in their half.

"In the second half they had much more of the possession but we defended magnificently, were very disciplined and I thought our set-piece was very good.

"When you come away from home to a club that are fighting for survival, who have got most of their experienced players back, to come and get the job done is a big achievement."