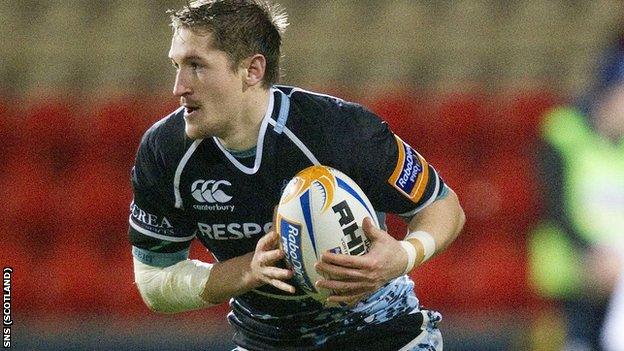 Glasgow scrum-half Henry Pyrgos has agreed a new two-year deal that will see him stay with the Warriors until at least the end of May 2014.

The contract news continues a memorable few days for the 22-year-old, who featured in Scotland A's 35-0 win over England Saxons on Friday.

"I've really enjoyed my first season and a half at the Warriors," he said.

"I've learned a massive amount from working with world class players like Chris Cusiter and the coaching team."

"We've been very impressed by how hard he's worked since joining the club and with the impact he's made on the field.

"With a guy like Chris Cusiter also in the squad, Henry has had to show a degree of patience at times, but whenever he's had an opportunity, he's made it very clear what he's all about.

"He's got a fine break on him and good game understanding and we're excited about working with him to ensure he continues to make progress."

Meanwhile, team-mate Ruaridh Jackson has recovered from injury and is named in the Warriors squad to face Scarlets on Thursday.

The 23-year-old pulled a hamstring when the two sides last met, on the 7 January, but the stand-off told BBC Scotland he felt back to his best.

"It's been a horrible season for me. But, hopefully, this weekend I'll be able to put it behind me and push on for the rest of the season."