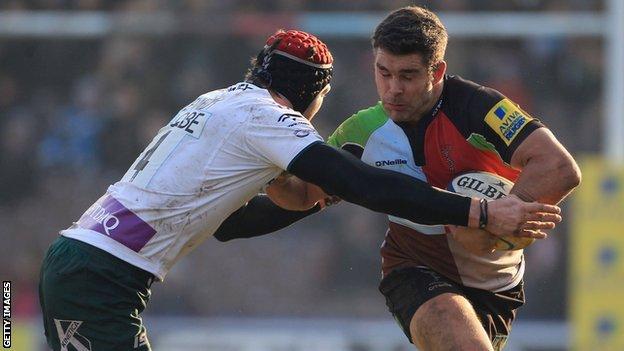 Harlequins opened up a seven-point lead at the top of the Premiership with victory over London Irish.

A Tom Homer penalty had Irish ahead at the break after his earlier converted score and penalty was matched by Tom Casson's try and Nick Evans' boot.

Tom Williams dived over in the corner and Danny Care kicked a speculative drop-goal to give Quins the lead.

Quins went into the game having lost four of their last five matches in all competitions and endured the worst possible start as Homer broke through the home side's defensive line and dived over before converting his own score.

Evans replied with a penalty before Harlequins took the lead when Luke Wallace fed Casson to dive over and cap a move which started with an excellent line break from Williams.

Two more Homer penalties, including one with the last kick of the first half, ensured the Exiles went into half time with the lead.

But Quins hit the front immediately after the restart as George Robson charged down Dan Bowden's kick and Williams won the race to the loose ball to touch down.

Care's unorthodox drop-goal from a ruck extended Quins' lead but Irish levelled when Joseph broke through three tackles to score and Homer added the conversion.

Another Evans penalty edged the home side back in front, before Chisholm gave them daylight when he collected Williams' grubber kick and held off Homer to score.

Adrian Jarvis's penalty gave Irish hope but Quins held on to increase their lead over Saracens at the top of the table.

"I thought Nick Easter was absolutely incredible. Did England get rid of him too quickly? Yes. Is he finished? No he is not, he is the best number eight in the country.

"He is an outstanding player who started late in professional rugby and he will go on late. You need players like him, he's a bit old school but he's bloody talented and hard.

"We're getting back to form but I think we still had a few more gears left in us. We looked a very threatening side today though and deservedly won.

"We knew today was going to be a big day, and to take all the men unavailable out and step up and play like that was good."

"We're obviously bitterly disappointed because I thought we were really good for the effort and a couple of key moments have really cost us dearly.

"People in the changing room are a little bit flat because we were good for it, the endeavour was good, the effort was good but you're playing against the team that is top of the table so it is going to be hard and you have to take your chances.

"They had two chances and took them both, which is credit to them but that is sometimes the cruel master that is professional sport."