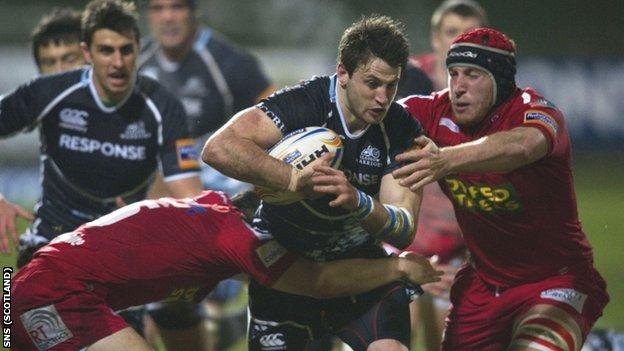 Ruaridh Jackson marked his first start of the year with a match-winning fly-half performance for Glasgow Warriors against Scarlets at Firhill.

His 14 points from converting prop Jon Welsh's try and four penalties kept Glasgow in control and put them third in the RaboDirect Pro12 table.

Scarlets relied on three Dan Newton penalties for their points.

With both sides' big-name players on Six Nations duty, Glasgow emerged from a rather scrappy match with the win.

Two penalties were squandered in the early exchanges, one by each side.

The Glasgow pack was penalised for not rolling away but full-back Newton sent his effort wide of the uprights.

Jackson also went wide with his first penalty but made amends minutes later when he broke to give Warriors prime field position in the opposition 22.

The move petered out, but Scarlets' indiscipline at the ensuing breakdown allowed Jackson to stroke over to give his side the lead.

The visitors levelled when Newton converted a straightforward penalty effort after Jackson was punished for holding on to the ball on the ground, but Sean Lineen's side recovered to dominate possession without creating any clear chances.

David Lemi appeared most likely to buck that trend, his chip through causing chaos in the visitors' defensive ranks, but a fantastic cover tackle from scrum-half Gareth Davies averted the danger, albeit carrying the ball across his own line in the process.

From the resulting scrum, Welsh powered over for the game's only try, Jackson adding the extras.

Jackson missed with a penalty effort late in the first half, but atoned for his inaccuracy with a successful attempt early in the second, stretching the hosts' advantage to 10 points.

The deficit was reduced only moments later when Newton banged over a penalty from close range, before adding another penalty on the hour as the home rearguard began to waver.

But two further Jackson penalties put the result beyond doubt, as the game drew to a drab conclusion.

Scarlets sit fifth in the table and are away to Leinster next, on Friday 17 February.