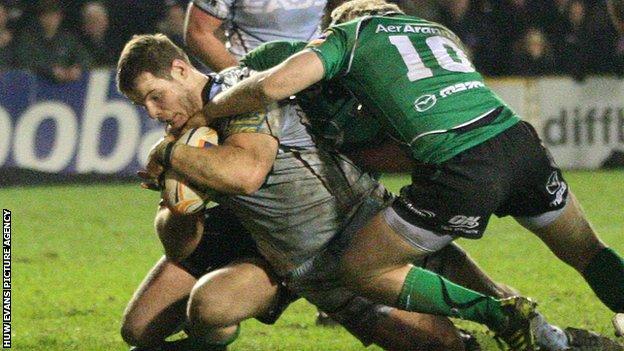 The visitors scored the only try of the first half with wing Tiernan O'Halloran crossing in the left corner.

But five Ben Blair penalties gave the Blues a 15-10 lead early in the second half, and then prop Sam Hobbs' try on 63 minutes sent the home side clear.

Connacht had the final say when O'Halloran's pass set up Dave Moore for a late consolation try.

It was the visitors to their 10th successive in the league, as the Blues moved up one place in the table to sixth.

O'Halloran's try came after 15 minutes as Connacht took full advantage of a ruck close to the home tryline.

Blues wing Tom James was not so ruthless when he ignored a clear overlap to surge for the line himself and was promptly held up by the scrambling Connacht defence.

Blair was as dependable as ever though, as the full-back slotted his third and fourth penalties of the half to give the Blues a 12-10 lead at the interval.

A crowd of 8,000 had turn out to witness the Blues' first appearance at the Arms Park since May 2009, but the match failed to ignite into any kind of spectacle.

But Hobbs' surge under the posts ensured the Blues fans could celebrate a try, which proved to be the match-winner.

Connacht blew a great opportunity to cut the deficit when Gavin Duffy's pass went astray at the crucial moment.

Their endeavour was rewarded when Moore crossed for their second try, but the Blues survived the remaining minute after Matthew Jarvis had missed the conversion.

The Blues board will meet on Monday to decide whether the remaining games of the season will also switched from Cardiff City Stadium to the Arms Park.