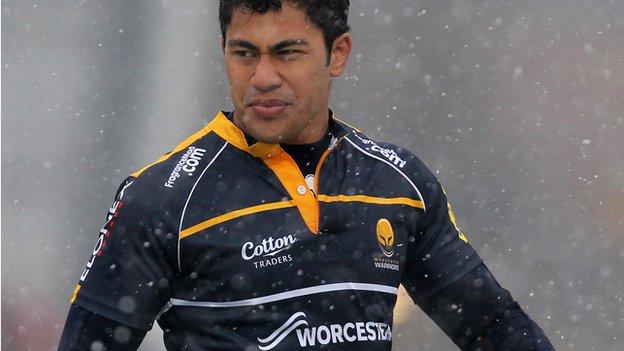 Warriors head coach Richard Hill has been suitably impressed by the 24-year-old after just three appearances for the club.

"He has fantastic potential," Hill told BBC Hereford and Worcester. "He is bright and has picked up what has been asked of him.

"Ravai is a big, powerful man who has good hands and a rugby brain."

The Worcester boss says the change in lifestyle has been hard for the Fijian, who had never seen snow before he played in it against the Ospreys last weekend.

"It is difficult to understate just what a change in lifestyle he has had to overcome since coming from Fiji and how difficult that can be when you come into a new culture," he continued.

"He has come from the other side of the world and had to deal with many new things. But he has settled in very well and he will continue to do so for the rest of this season.

He has fantastic potential to get even better and we know he will be a really good player for us in the future.

"We can see more than enough in Ravai to know he will be a big asset for the Warriors when he has got used to his new life here.

"He has fantastic potential to get even better and we know he will be a really good player for us in the future."

Fatiaki said: "I have really enjoyed my time already in England, in Worcester and with the team at Warriors, who have all helped me settle into a new country.

"I feel my game can only get better here with the coaching team and playing in the Aviva Premiership. I look forward to the coming years as a Warrior and hope we can all bring success to Sixways."

Warriors have also re-signed fly-half Danny Grey after his one-year deal ends in May.

The 28-year-old joined from Montauban this season and has made eight appearances for the Warriors.