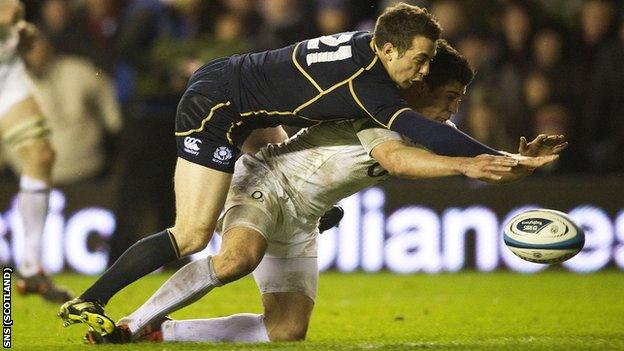 Greig Laidlaw replaces the retired Dan Parks at stand-off and Geoff Cross is in for prop Euan Murray, who will not play for religious reasons.

Uncapped trio Stuart Hogg, Duncan Weir and Ed Kalman will be among the replacements in Cardiff.

Scotland are out to make amends after a disappointing 13-6 loss to England.

Laidlaw won his first two caps as a substitute scrum-half and made his first Scotland appearance at stand-off coming off the bench to replace Parks against England on Saturday.

The 26-year-old, nephew of former Scotland and Lions scrum-half Roy Laidlaw, is also in line to be the frontline goal-kicker.

"Congratulations to Greig on his first start," said Robinson.

"He is a gifted footballer who is acclimatising very well to the differing demands of the stand-off position from having spent most of his career at scrum-half.

"Having lost last weekend, I believe the time is right to move on and look to develop our emerging talent at stand-off."

Glasgow Warriors' Weir is among those given a chance to impress.

He scored 20 points, including a solo try, in Scotland A's 35-0 win over England Saxons last Friday, while Hogg also scored a try in the match at Galashiels.

Robinson added: "I've always stressed the importance of the A team and the part that both Duncan Weir and Stuart Hogg played in the game at Netherdale last week is another reason for my continued excitement and belief in Scottish rugby."

With Murray refusing to play on a Sunday, Cross is the only change in the pack, coming into an all-Edinburgh front row of hooker and captain Ross Ford and loosehead Allan Jacobsen, with Glasgow's Kalman providing cover from the bench.

Richie Gray and Jim Hamilton remain at second row, with Alasdair Strokosch, Ross Rennie and David Denton, who was man-of-the-match against England in the back row.

Chris Cusiter stays at scrum-half, preferred to Laidlaw's Edinburgh club-mate Mike Blair, who is among the replacements.

Sean Lamont and Nick De Luca at the centre partnership, with Max Evans and Lee Jones on the wings and Rory Lamont at full-back.

Scotland's defeat to England was the fourth game in a row without a try for Robinson's men.

"The issues we had at the weekend were not being able to convert chances," explained the head coach.

"The results hurt, with the expectation that's there because the side had been performing well and it's just about being able to take that one step.

"It will come. It will happen. And what we have to look at is focusing on it happening this weekend."