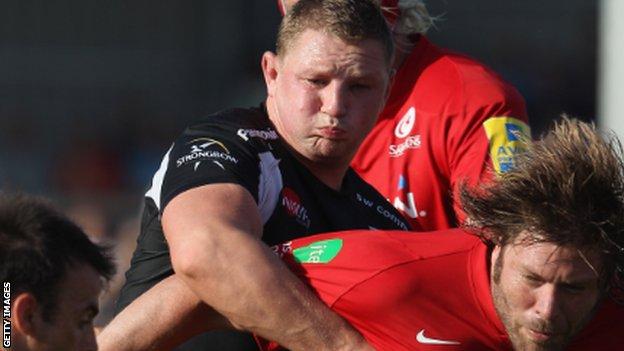 Exeter Chiefs prop John Andress will join Worcester on a two-year deal at the end of the season.

The 28-year-old Irish prop after spending two years at Harlequins.

Belfast-born Andress first joined Exeter from Ulster in 2007 and has played 56 games for the Devon club in the Championship and Premiership.

"He is abrasive as a player and desperately keen to do well, and push to be successful both with Worcester and also on the international stage.

"He is a good character who I know will bring a lot to our group and I'm sure the supporters will love him when he arrives."

"It is disappointing to see John leave us. We offered him a contract, but for various reasons John has decided to move on," said Baxter.

There are two very good tight-heads already here and if I want to get more game time, I feel I have to move on

"He has filled an important role in a successful season so far and hopefully he will be part of a good finish to the season for us, and he goes with our best wishes for the future."

A former Ireland A international, Andress is the first Exeter player to announce he is leaving the club at the end of the season.

The prop has seen his playing time limited as he has fought with the likes of Brett Sturgess and Hoani Tui for a starting place.

He has only started four Premiership games for Exeter this season, with the rest of his games coming in the LV= and Amlin Cups.

Andress said: "There are two very good tight-heads already here and, if I want to get more game time, I feel I have to move on.

"Leaving Exeter has been a really tough decision for me. I've had to speak to a lot of people close to me, including my wife, members of my family and other advisors within the rugby world, about the best way forward.

"Rob [Baxter] has been great with me - both times I've been with the club - and he has helped develop my game massively.

"I knew when I spoke to him last year that the club would progress and that his vision for the game and the long term outlook of the club would stand him in good stead."