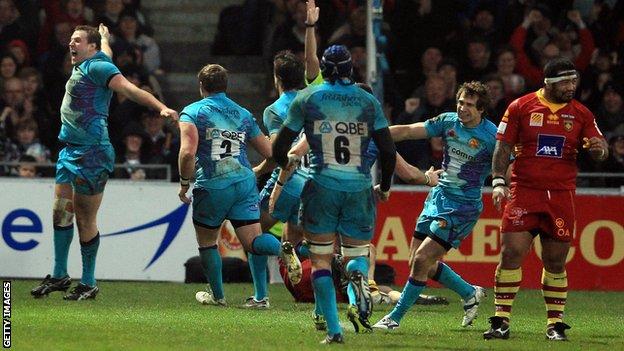 This time two years ago Exeter Chiefs were in a battle with Bristol for the right to top the Championship and get promoted to the hallowed turf of the Premiership.

It shows how the old rugby order has changed in that time as Bristol are still top of the Championship, while if the Premiership ended today Exeter would qualify for the Heineken Cup.

In under two years Exeter have gone from a team many thought would be whipping boys to a side that are capable of causing even the best of sides problems.

Winger Matt Jess has been with the Chiefs since the ride towards the Premiership started and he says a Heineken Cup place is what he and his team-mates are aiming for.

"It'd be massive, we're not hiding it. We were top eight last year and we want to be in and around the top six this year. We've made that a bit of a target," Jess told BBC Sport.

We, more than anybody, appreciate how important it is to be in the Premiership and how hard we've worked to be here

Already Exeter have made club history as they booked their place in the knockout stages of a European competition for the first time after topping their Amlin Cup group, sealing a quarter-final tie away to Parisian power-houses State Francais.

"Getting that one step and getting into the quarter-final of the Amlin Cup is a massive feat in itself and we've all put our hands up and said as a squad 'we've all worked hard for that'," Jess says enthusiastically.

So what has happened at Sandy Park, a windswept new ground that overlooks the M5 on the outskirts of Exeter, in the past few years?

Scrum-half Kevin Barrett played for the Chiefs from 2005-2009, seeing the club's infrastructure and professionalism grow in the second tier, before moving to Saracens for two seasons.

He came back to Sandy Park last summer and says the professionalism that coach Rob Baxter and his team have deployed across the club is why Exeter are flying as high as they are.

"The big difference is the science behind things. Everything's measured now, nothing's left to chance in our analysis and everything we do," said the former England Sevens man.

"Everything's spot on and everything's geared to making you perform well on a weekend."

EXETER CHIEFS ON THE RISE

Off the field the Chiefs have ambitious plans to expand.

They want to double the capacity of Sandy Park from just over 10,000 to 20,000, enough to allow them to host knockout matches in the Heineken Cup.

The club's academy goes from strength to strength, with four youngsters named in the England Under-20s squad for their Six Nations game with Italy this week and a host of other young players plying their trade in the Championship on dual-registration.

This summer they brought in World Cup stars such as Wales prop Craig Mitchell and Argentine winger Gonzalo Camacho, who have gelled well with those who remain from the promotion roller coaster.

Exeter face one of the powerhouses of English rugby, Leicester Tigers, at Sandy Park on Saturday.

The Chiefs surprised the Tigers on the opening day of the season at Welford Road and boss Rob Baxter knows that performances against the big teams are what will mark his side out from the rest.

"We like to talk about being ambitious and if you're ambitious these are big games that you've got to perform well in if you want to see yourselves progressing up the league," he said.

"If you're happy with where you are you can go out there and play OK and not win the game. For us it's got to be a bit more than that.

"Games like this, this is what it's for, to play in these fixtures."