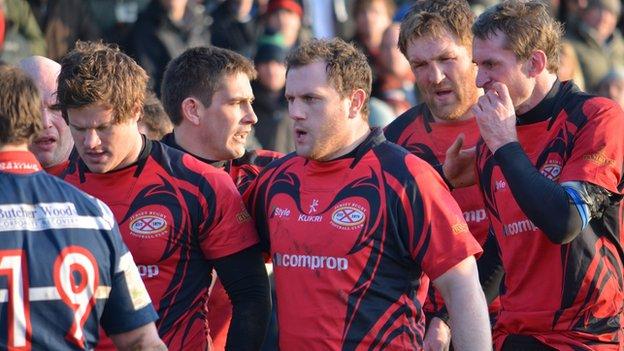 Jersey have gone 10 points clear at the top of National One after a 44-7 win over relegation-threatened Stourbridge.

The game was switched to a training ground at St Peter because part of the main pitch was frozen.

Stourbridge took an early lead when winger James Hearn touched down but it was to be their only score.

James Copsey (2), Donovan Sanders (2), Nick Trower and Glenn Bryce grabbed tries for the islanders to help them to a 16th straight win.

"We started a little bit slowly but once we got possession of the ball I felt we executed some great plays in attack today," said Jersey director of rugby Ben Harvey.

"We're a difficult side to stop when we get going and I thought the boys were terrific.

"It was a bit unnerving having to move to this pitch - it was a good day."

The match was the only game of the day in National One because of the frost and snow in England.

An announcement half an hour before kick off asked fans to move from pitch one to pitch four.

The result means Jersey go 10 points clear and continue their bid for promotion to the Championship, but their title-rivals now all have a game in hand.

Try-Scorer Hearn told BBC Radio Jersey: "It was a tough game today and was really unexpected to play in a different environment.

"We went 7-0 up but after that I think we took our foot off the gas a bit and to be fair to Jersey they came back and played really, really well."