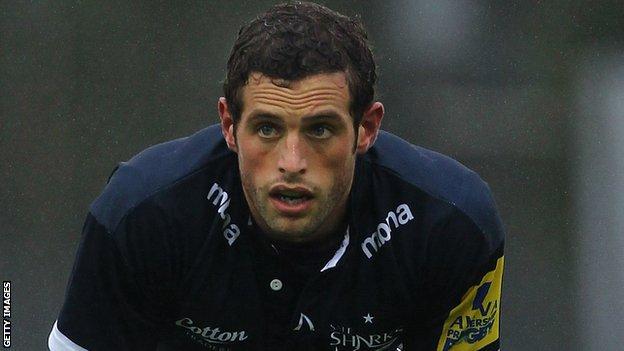 Sale chief executive Steve Diamond has confirmed the club are searching for a new fly-half for next season.

Macleod, 28, has started every Premiership game racking up 231 points.

"We've got a shortlist of five who are available and we're doing our selective recruitment on those as we speak.

Diamond has already secured lock Richie Gray and prop Eifion Lewis-Roberts for next season and has promised not to make wholesale changes similar to last summer, which saw over 20 players leave.

The Sharks have also begun renewing contracts that expire in the summer with Welsh trio Macleod, Dwayne Peel and Marc Jones all signing new deals this week.

Having taken up his new role of chief executive at the start of the month, the former Sale hooker is now looking to bring more English players to Edgeley Park.

"What we have to make sure, when we are doing the recruiting, is that is that we have an equal number of overseas players as English qualified players," Diamond added.

"Because I put the side together last year the way I did, the balance isn't right at the moment, we don't have enough English players on a regular basis.

"Just like the old adage a good big'un always beats a good little'un, if I have the opportunity to sign an English qualified players as opposed to a foreign player, we'll do it.

"We're going to bring higher quality world class players to the club now in ones and twos and threes, not like we had to do last year with a mass exodus.

"I'm sure with those quality of players that I've already signed, and one or two to come, it will compound the squad, it will make it more stable and with stability we can progress next year."