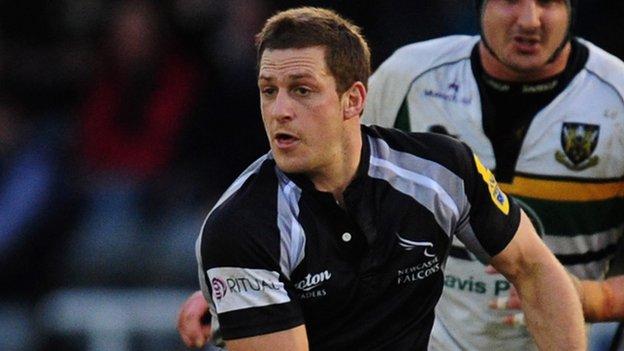 Newcastle head coach Gary Gold has said Jimmy Gopperth's decision to sign a three-year deal is evidence of growing belief in the new regime at the club.

Gold came in to replace Alan Tait in January following the club's slide to the bottom of the Premiership, and saw Gopperth as a key part of his plans.

"It's been an encouraging call of faith by Jimmy to say he and his family are happy here," Gold told BBC Newcastle.

"It shows the intent that a player of his standard sees the potential."

Gold added: "He has seen that [club owner] Semore Kurdi's ideas, plans and strategies for the club are encouraging going forward."

Kurdi placed his trust in the hands of Gold, and his coaching team of Mike Ford and John Wells, following a disappointing run of form under coach Tait, who is said to be taking a break from the game.

Since taking charge the former South Africa assistant coach has played down the possibility of steering the Falcons - who are nine points adrift at the bottom of the Premiership - to safety.

But he has been encouraged by the first two games in charge.

"They're a great bunch of guys. To a man there isn't a guy in the squad who isn't desperate to get back to winning ways and turn the club around," Gold said.

"But there's a lot of hard work ahead of us. We seem to be continuously hampered by injuries. There's certain positions where we have no strength in depth at the moment but that's the way it goes.

"There's no moaning about it, it's the way it is. We're having to adapt to it the best way we can and I'm really encouraged by the attitude of the guys on the training park."