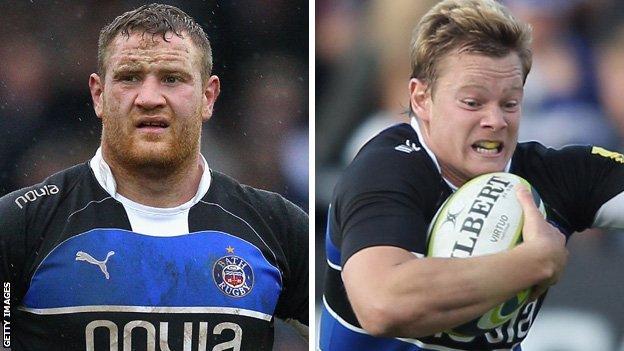 Ross Batty and Chris Cook have committed to new contracts with Bath.

"They are both talented players, who have developed well over the past two years," said Bath director of rugby Sir Ian McGeechan.

"I see them both as a very important part of the continued development of the first team squad."

He continued: "Ross is a very athletic, mobile forward, which is important to our style of play, and Chris has all the skills necessary for a top class scrum-half.

"They are both great members of the squad on and off the field, so we are really pleased that they have committed themselves to Bath."

Batty has made 27 appearances for the club since signing from Rotherham Titans in the summer of 2010.

Talking about his contract extension, he said: "It's a great opportunity for me to be part of Bath, and to progress as a player down here in the West Country.

"Martin Haag [coach] has helped me develop a lot over the last two years, and I think it's a club that has got a massive future, with the squad, facilities and coaches we have."

Academy graduate Cook, who has played seven games this season, added: "I'm really happy to have signed for two more years. I love this city and want to stay at the club as long as possible. We are building a really strong side, with both youth and experience and I couldn't think of anywhere I'd rather be."