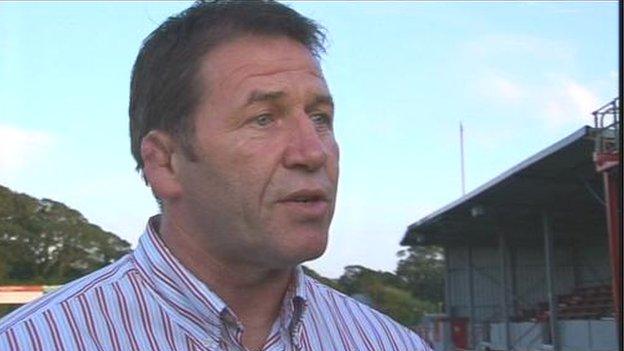 James Greenwood notched up three tries for visitors who eventually triumphed over a battling Redruth outift.

"We had 21 players to choose from and now we're down to 15," Pernberthy told BBC Radio Cornwall.

"Owen has got a neck injury that he picked up early on and tried to play through it, but he got caught again and it doesn't look good at all.

"Tom Duncan has damaged his knee which is not looking good. Chris Instance has dislocated his shoulder. Chris Bailey has got a shoulder injury. We're right up against it."

Forward options are looking particularly short at the Recreation Ground with Chris Fuca also ruled out until next month with a dislocated shoulder.

Sam Parsons and Dean Bonds picked up tries for the hosts, but it was not enough against table toppers Richmond, but Penberthy was pleased with his side's showing.

"I think the boys gave a superb performance today. They gave a great account of themselves. From one to twenty I'm really proud of every single one of them. They've given it all today.

"Even the Richmond guys said that's the most physical game of rugby they've played this season."