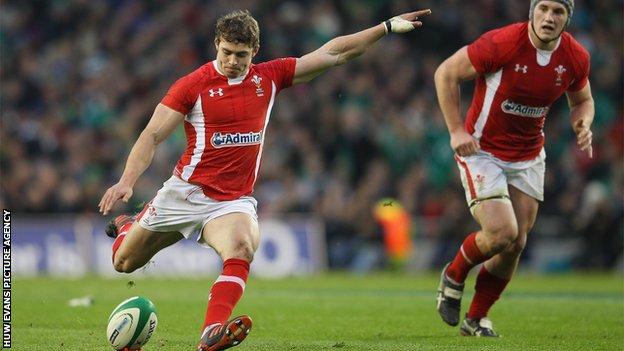 Halfpenny took over from Rhys Priestland during Sunday's win over Ireland, landing a last-minute penalty to snatch a 23-21 opening victory.

"Leigh did well when he was put under that sort of pressure," said Gatland.

"We know he's been kicking well for the Blues so there's a good possibility he probably will start in that role."

Full-back Halfpenny, who came within inches of kicking a penalty to send Wales into the 2011 World Cup final, has recently dislodged Dan Parks as the first-choice kicker for the Blues.

Two weeks before Wales' triumph in Dublin, the 23-year-old landed eight kicks to send his region into the last eight of the Heineken Cup.

Both Halfpenny and fly-half Priestland have been working with Wales kicking coach Neil Jenkins in the build-up to Sunday's match with Scotland, but a final decision on who will kick for goal has not yet been taken.

Priestland, who made a late recovery from a knee injury to be included in the team to face Ireland, missed two penalties and a conversion before Halfpenny took over last Sunday.

"I haven't actually spoken to the two kickers," revealed Gatland on Friday.

"They've been working with Neil Jenkins this week so that's going to be his decision with the two kickers. I'll probably have a bit of an input into it."

Whoever eventually gets the nod, the conditions for kicking should be perfect as the Millennium Stadium roof is set to be closed.

Scotland have voiced their preference to shield the players from the wintry elements and Gatland is happy to comply.

"I understand they want to close the roof, which is encouraging for fans and everyone alike," he said.

"It sounds like it's going to be a positive game of rugby by both sides. Hopefully it's a great occasion."

Gatland expects to face a "frustrated" Scotland side after they lost their championship opener to England despite a clear dominance in possession and territory.

The Scots have now failed to score a try in their last four games, but Gatland insisted the visitors will pose a potent attacking threat, pointing to their last visit to Cardiff in 2010 as evidence of the dangers of complacency.

"Two years ago they came down here and we probably underestimated them," said Gatland.

"They frustrated us. They played well, they took their opportunities and we really had to dig deep in the second half.

"So we've got to make sure that we improve on last weeks' performance and I think it's going to be a lot righter than people think it might be."

Wales have named Sam Warburton in the side despite the captain taking a very limited role in training this week.

Warburton suffered a dead leg in the first half in Dublin, and was replaced by Justin Tipuric.

But with Tipuric subsequently ruled out with an ankle injury, Wales have kept Warburton away from any potential dangers.

"I've been staying away from contact training because Justin is injured so just taking no risks," said Warburton.

"I don't want to take any contact in case it flares up again. But I'm pretty positive for the weekend."