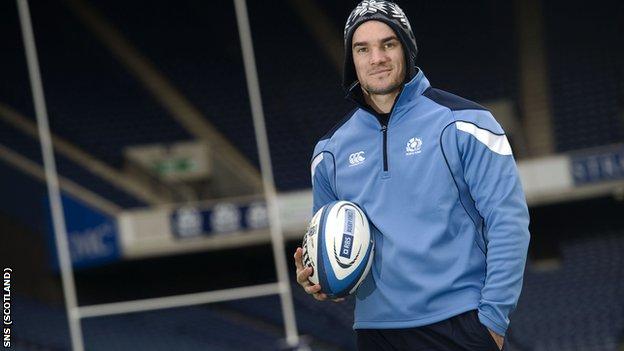 Max Evans thinks Scotland are on the verge of a complete display as he prepares to return to the Millennium Stadium, where his brother Thom suffered a career-ending neck injury.

Scotland take on Wales in Cardiff on Sunday aiming to improve on a disappointing 13-6 loss to England.

And the winger said: "It's going to continue to be the time to deliver. We need to deliver a good performance.

"We've got to keep the confidence we had going into that England game."

Scotland have requested that the Millennium Stadium roof be closed as they seek to take on Wales at their own expansive game.

And Evans is certain Andy Robinson's men can erase the painful memory of the loss to England, when several try-scoring chances were spurned.

"We did put in a good performance and it was just the small margins - get those right and it's a complete performance," he explained.

Scotland have failed to score a try in their last four outings but Evans is confident that profligacy has been resolved by some focused training sessions.

He said: "It's been addressed, so let's hope we get it right against Wales.

"The main thing has been a real clear understanding. We know the pattern we're trying to play, guys know where they're supposed to be.

"We've been setting ourselves up in similar situations as we got ourselves in against England.

"We will get in those positions against Wales. It's knowing the right thing to do.

"Where we might not have gone the right way during the game, we've corrected that in case we're in a similar position against Wales."

Scotland are returning to the scene of one of their most devastating losses in recent times, not just in terms of the manner of defeat, but also in the injury toll, as they seek a first win in Cardiff in 10 years.

Wales overturned a 10-point deficit with three minutes of normal time remaining to win 31-24 two years ago, while Chris Paterson suffered a lacerated kidney and Rory Lamont a knee injury.

The most worrying injury was for Thom Evans, who required two neck operations at the University Hospital in Cardiff and saw his rugby career brought to a close following 10 caps.

Evans added: "It will be interesting to see what the feelings are actually being in the Millennium Stadium and being on the field again.

"But I've always said I wasn't aware of the severity of Thom's injury until after the game.

"My feelings on the pitch were good, with my try and the way we were playing, just that terrible feeling [of defeat] at the end of the game."

Evans believes it will be easier to cope since his brother is now embarking on an athletics career with the aim of competing at the 2014 Commonwealth Games in Glasgow.

Evans, who is set to win his 26th cap on Sunday, added: "It's a lot easier for me to not have that in the forefront of my mind because of how well Thom's doing at the moment.

"It's very exciting what he's achieving at the moment, in terms of his sprinting.

"It's still early days for him, but he's starting to compete and he's in a position where you wouldn't know that he had broken his neck two years ago."

Meanwhile, former Scotland winger Thom said he will not be attending the game.

He told BBC Radio 5 live: "It's a tough one because I was lucky enough to play at the Millennium Stadium. But even with what happened I feel immensely lucky in the way I've recovered.

"I'm not going to attend the game because it is still too raw."