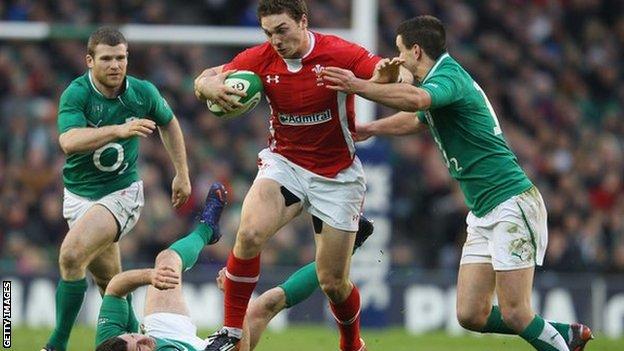 Wales coach Warren Gatland hopes teenage wing George North "does not get any bigger" and says the player will be advised not to add much more muscle to his already impressive frame.

His last score came in their opening Six Nations win over Ireland in Dublin.

"We've got to make sure that he doesn't get too big.

"And one of the things he's got to work on is that he's very big, very powerful and very fast and the temptation there is to spend too much time in the gym and forget about your speed and power.

"And that's what we've got to make sure of - we just have to get the balance right with him.

"We don't need to rush things. He's naturally going to grow and get bigger as he gets a bit older anyway.

"We just need to be mindful of how we look after him because he's only got to go into the gym and look at the weights and he puts on a few kilograms.

"So it's just fitness staff, the medical team and the coaching team [must be] smart in how we look after him."

North lines up in an unchanged starting back division against Scotland with fellow towering wing Alex Cuthbert included after coming off injured in Dublin.

James Hook came on at full-back with Leigh Halfpenny switching to wing for the second half against Ireland.

And Gatland says he was not tempted to continue with versatile Perpignan fly-half Hook in the number 15 jersey.

"We wanted to continue with continuity," said Gatland.

"James did very well when he came on - we know he can cover a lot of positions, but he's been playing at 10 and playing well there at Perpignan.

"So we wanted to give some confidence to Alex Cuthbert, who unfortunately got a knock, but did really well for us in the first half.

"And it was a message to everyone that even though we know James can play at full-back, we're still considering you as a 10."

Gatland says defence coach Shaun Edwards has set a challenge to extend Scotland run of failing to score a try.

He said: "Shaun has set the players a challenge this week - let's make this the fifth game in a row where Scotland don't score a try.

"We want to limit them to a certain number of points and for us to take our chances.