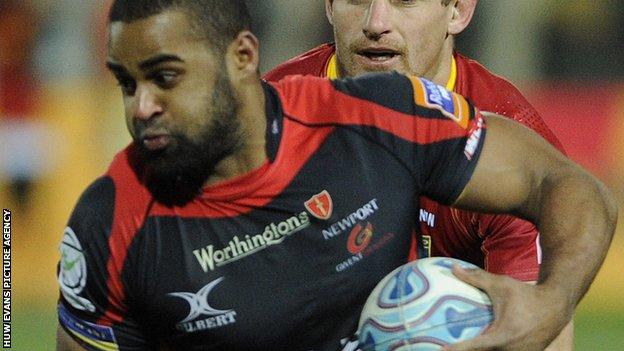 Hazell said Brew performed a last-minute U-turn by rejecting the Dragons' offer of a new contract.

And the chairman accused Brew's agent of influencing the move.

"We are really disappointed. We've been in negotiation with Aled for some time now," said Hazell.

"We understood he was going to sign for us. But a lot of these decisions these people are taking are because agents get paid for transferring them to other clubs.

"If they re-sign with us they don't get a fee so [agents] will do their damnedest to move them on."

Wales wing Brew, 25, is the third player expected to leave the Dragons when his contract expires at the end of the season.

Fly-half Jason Tovey will be playing for Cardiff Blues next season, while lock Luke Charteris is expected to sign for French club Perpignan.

Fellow Wales international Mike Phillips, James Hook and Lee Byrne have already been tempted across the Channel by lucrative contracts and Hazell warned the introduction of a salary cap in July 2012 will lead to further departures and weaker teams at the four Welsh regions.

"It's going to get worse in terms of the quality of the rugby in the regions, it's bound to," he said. "But what it will do is get rid some of these over-paid overseas players.

"But it's not only the Dragons it's other regions as well and they are going to lose more players.

"It's going to have to be arrested but how you do it I don't know."