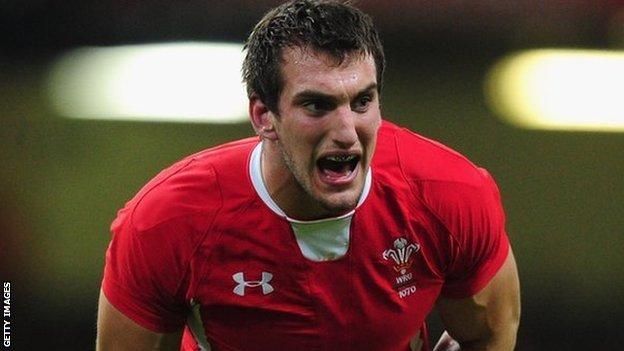 Wales expect captain Sam Warburton to be fit to face England at Twickenham on 25 February.

Flanker Warburton was a late withdrawal from the side that beat Scotland and will not train until Monday.

George North (ankle), Ryan Jones (dead leg) and Huw Bennett (calf) will also not take any part in training for the rest of the week.

But Wales hope all four - plus Matthew Rees and Justin Tipuric - will be available for their Triple Crown bid.

"We'll be looking pretty healthy by the start of next week," said forwards coach Robin McBryde.

"We've got a couple of boys coming back into fitness so we're looking for the majority, or if not all the squad, to have a clean bill of health by the time we sit down to select a team for the England game."

Rhys Priestland (calf) and Justin Tipuric (ankle) joined the other four in sitting out Wednesday's open training session at the Millennium Stadium, which attracted 13,000 supporters.

Warburton withdrew from Wales' side just before kick-off against Scotland, with Aaron Shingler making an impressive Test debut in his place.

The captain had been selected despite doing no contact work in training during the lead-up to the match, but Wales say he will be "fully integrated" back into training on Monday.

Shingler was called into action because Warburton's understudy Tipuric was out with an ankle injury, but the young Ospreys open-side is also set to be back in contention to face England.

Jones captained the side in Warburton's absence but he was limping heavily as the players left the field and is said to be in the "early stages" of his recovery.

The biggest worry appears to be over North's fitness. The wing, who has 10 tries in 18 Tests, limped off just before half-time at the Millennium Stadium on Sunday and will have "intense rehab" on his sprained ankle over the coming days.

Hooker Bennett went off at half-time with a calf strain but he too hopes to return to training early next week. And a further boost could be the availability of former captain Matthew Rees, who could be considered after a calf strain.

Lock Alun Wyn Jones could also come into contention as he continues his recovery from a toe injury.

Jones played for the first time since November last Friday as Ospreys beat Edinburgh 15-14 at Murrayfield.

With Luke Charteris (wrist) and Bradley Davies (banned) out of the Six Nations, Jones' recovery is well-timed.

"We're keeping a close eye on Alun Wyn, as we are with a few others," said McBryde.

"Ospreys have got a game against Aironi on Friday night so it's good for them to have a bit of game-time under their belts, especially someone like Alun Wyn who hasn't played for a while. If he comes through that's certainly another boost for us."

A win for Wales at Twickenham would secure the Triple Crown and keep them on course for a third Grand Slam in eight years.