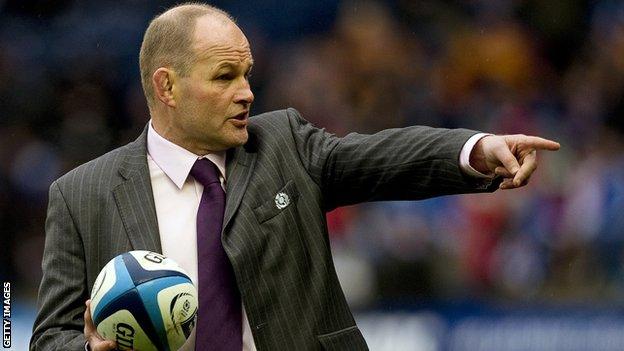 Scotland coach Andy Robinson says he remains proud of his Six Nations squad, despite a second loss in this year's tournament.

After an opening defeat to England, the Scots were defeated 27-13 by Wales in Cardiff.

But afterwards Robinson was keen to draw on the positives of the match, including a first try in five matches as Greig Laidlaw crossed the line.

"I'm proud of the way the team's gone out to play the game," Robinson said.

"We played very well and we're hurting and disappointed."

Laidlaw scored all of Scotland's points through a try, a conversion and two penalties, but Robinson blamed errors either side of half time for Scotland's inability to overcome their opponents.

"It was three-all at half time. We had opportunities to score just before the break," he added.

"Then just after half time we missed the restart and Wales took the opportunity and then straight from the kick off we end up with somebody sin-binned.

"It's down to us not being able to keep our composure just before half-time."

"That was a key moment on the Welsh line, we could score points there and we don't," the former England flanker and coach added.

Defeat leaves Scotland with a Six Nations record under Robinson of nine losses in 12 matches, with just two wins and a draw.

"We have a decent side," he insisted. "We went toe-to-toe with Wales, who are a good team.

"I won't fault the players' attitude but it's about winning. I've never shied away from that and I still won't. That's what we're here for.

"I want the players to go out and perform the way they've done today but obviously limiting the mistakes we've made."

Robinson refused to criticise Nick De Luca and Rory Lamont for the needless yellow cards they received for tackling players off the ball.

He said: "The guys did not deliberately get sin-binned, but that's what happens in the game. Wales exploited the space really well and kept hold of the ball."