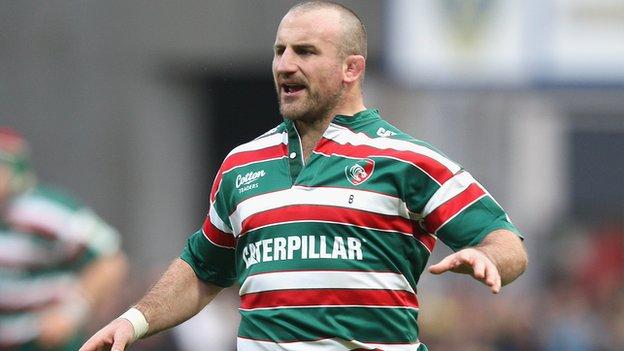 Leicester Tigers hooker George Chuter says they are running out of time to push for a top two Premiership finish this season.

The 35-year-old's comments follow their latest set-back in the 19-11 defeat by Exeter on Saturday.

Chuter told BBC Radio Leicester: "We can push the blame squarely at our own door. It's not acceptable at all.

"We are running out of chances and there's less and less time to push for the top two."

The Premiership appearance record holder added: "It was largely down to our errors that Exeter got away with the game rather than them generating any sort of good tries or good phases of play."

With 14 rounds of the Premiership gone the Tigers are in fourth spot, 12 points behind second-placed Saracens.

In order to qualify for a home play-off semi-final they must finish in the top two at the end of the regular season which concludes on Saturday, 5 May.

"We'll go back to the work. We'll look at the video and it won't be pleasant but we'll have to keep trying to work and put things together," Chuter continued.

"Perhaps we just need to be a bit more accurate in training and in practising what we need to do."